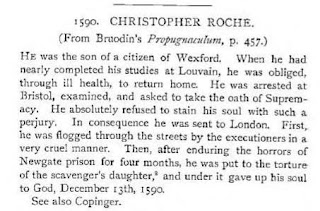 On December 13, 1590 Wexford man Christopher Roche died in prison in London. The seventeenth-century martyrologist Anthony Bruodin (1625-1680) recorded Roche's case in his 1669 catalogue of Irish martyrs, Propugnaculum Catholicae Veritatis. He states that the prisoner was subjected to a particular form of torture known as the 'Scavenger's Daughter' during which he perished:

He was the son of a citizen of Wexford. When he had nearly completed his studies at Louvain, he was obliged, through ill health, to return home. He was arrested at Bristol, examined, and asked to take the oath of Supremacy. He absolutely refused to stain his soul with such a perjury. In consequence he was sent to London. First, he was flogged through the streets by the executioners in a very cruel manner. Then, after enduring the horrors of Newgate prison for four months, he was put to the torture of the scavenger's daughter, and under it gave up his soul to God, December 13th, 1590.

English Jesuit writer Father Henry Foley (1811-1891), who meticulously researched the martyrs of his order, gave a description of the 'Scavenger's Daughter' and explained what was involved in this type of torture:

This was one of the racks employed in the Tower for the torture of Catholics; it was a broad iron hoop, consisting of two parts fastened together by a hinge. The prisoner was made to kneel on the pavement, and to contract himself into as small a compass as possible. Then the executioner forcing down his shoulders, and introducing the hoop under his legs, compressed the victim close together, until he was able to fasten the extremities of the hoop over the small of the back. The time allotted to this kind of torture was one hour and a half, during which time it commonly happened, that for excess of compression the blood started from the nostrils, and sometimes, indeed, from the extremities of the hands and feet.

Immediately after this account Father Foley records two of its English clerical victims, Fathers Cottam and Kirby who  'suffered this fearful torture for longer than an hour on the 10th of December, 1580; the former bleeding profusely from the nose'. Yet both survived the embrace of the Scavenger's Daughter and were executed in 1582, whereas Bruodin records that our Irish layman did not. Perhaps this might be explained by the fact that Roche's health may not have been that strong to being with, given that he had been forced to abandon his studies on health grounds and could hardly have been improved by flogging and imprisonment.

I was unable to find any record of Christopher Roche in the English writers on the Tudor martyrs but at the end of his translation of the Bruodin account above Father Murphy cited John Copinger. Like Anthony Bruodin Copinger was also an Irish priest in exile on the Continent. He published a catalogue of martyrs as part of his 1620 work The Theatre of Catholique and Protestant Religion. Father Copinger's account contains all of the elements of Roche's story as later given by Bruodin but attributes his death to the 'extreamitie' of his imprisonment, without any specific mention of the 'Scavenger's Daughter':

Christopher Roche natiue of Wexfoord, for that he could not enioy his health in Flanders where he was a student, passing by Bristoe to come for Ireland, was there apprehended, and was putt to the oath of the supremacy; which when he refused, he was carried vp to Lōdon where he was sore whipt about the streetes, and was putt into a most filthy prison in gyues & fetters, and died there through extreamitie Anno 1590.

Interestingly, Christopher Roche is not the only Irish bearer of this Norman surname to have been martyred in England, for in 1588 Irishman John Roche was executed at Tyburn along with Saint Margaret Ward. There is also an Irish female martyr, Lady Ellen Roche of Fermoy, County Cork, who was hanged in 1652.

Christopher Roche is number 95 on the Official List of Irish Martyrs (1918). No further progress has been made on his cause.

Posted by Marcella at 06:00 No comments: