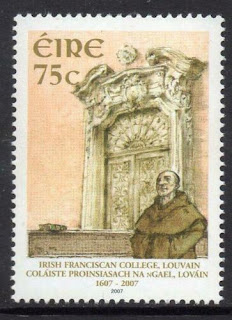 On August 25, 1914, international opinion was outraged by the sacking of the Belgian town of Leuven (Louvain) and the burning of its famous university library. Ireland had a particular reason to share in the grief as Louvain was home to its own historic Franciscan centre of learning, where exiled scholars kept alive the traditions of the Irish saints and embraced the challenge of the Counter-Reformation. In the article below, taken from a New Zealand newspaper of 1915, we get a roll-call of the famous Irish alumni of Louvain, including those who are numbered among the Irish martyrs:

The Irish people refused to accept the teachings of Henry VIII., Elizabeth's arguments failed to convince them, Cromwell and other vigorous evangelists were equally ineffectual. Ireland kept the faith which had come to her centuries before from Rome, though she was able to keep very little else. And in those awful years, during which Henry plundered the churches and monasteries, and Elizabeth and Cromwell persecuted the Catholics, Ireland knew no rest. What Ireland endured in the sixteenth, seventeenth, and eighteenth centuries we know in part only; but we know enough to be sure that no people were ever before or since subjected to such a long period of cruel persecution, and none came so gloriously through the ordeal. For centuries it was a life-struggle for faith and fatherland; and in our days we ought to remember with pride and thank God for the result.

These centuries were surely unfavorable for literary activity amongst the Irish people. Yet to them belongs a glorious band of Irish scholars, whose works still remain for our admiration and instruction. Froude, no partial witness where Ireland is concerned, testified with what indomitable courage and zeal the ranks of the clergy were kept filled; with what love schools were kept going, often in ruins or caves or under the open sky, where boys, poorly clad, became familiar with Euclid as well as with Virgil and Homer. English laws notwithstanding, law, music, history, and poetry were still cultivated and taken all in all the oppressed Irish were better educated than the pampered English.

But for higher studies in these years and long after, the Irish had to go abroad to seek for learning in the great schools of the Continent. Italy, France, Spain welcomed with open arms the poor Irish scholars. But, in no place did the exiles meet a warmer welcome than in Louvain; and in no place did their labors and genius bear such fruit. The Franciscan Monastery in Louvain became a veritable cradle of Irish historians and theologians. There Archbishop Florence Conry, of Tuam, acquired his great learning; there, too, Hugh Caghwell lectured with such distinction that he was called to Rome to teach at Ara Coeli, where he died finishing his last work, an Irish catechism, just when he had been appointed to the See of Armagh. A similar work was then published by Father Bonaventure Ossaeus. Father Anthony Hickey, author of a defence of the Immaculate Conception, and Robert Chamberlain, an Ulster man, both taught in Louvain with great success. Father John Bower, a Cork man, won fame in the same school by his works on dogmatic theology and philosophy, and in 1625 was brought to Rome to teach by Father Luke Wadding. Father Peter Wadding, a Waterford man, entered the Society of Jesus at Tournai, and he became a professor at Louvain.

For historical studies especially, the College of St. Anthony at Louvain was renowned. Amongst its greatest luminaries were Hugh Ward, and also Christopher Fleming, who was afterwards murdered in the streets of Prague, whilst saying his Rosary, by seven Calvinist fanatics. To St. Anthony’s also belongs the great Donegal man, John Colgan, whose value as a historian modern research has completely vindicated. Reeves points out that no writer of Irish history can be independent of Colgan— O’Flaherty, Harris, Archdall, and Lanigan are all his debtors. The volumes of the Franciscan monk have become standard works in Irish antiquities. Inseparably connected with Colgan and Louvain are the Four Masters. First and greatest of the four was Michael O’Clery, born about 1580 in Co. Donegal, where from the bards he got his first knowledge of Ireland’s ancient history. At Louvain he became a Franciscan, and devoted himself to the study of the subject which captivated his mind as a boy. In 1627 he returned to Ireland, where he spent seventeen years collecting materials from which he compiled four martyrologies and a vast amount of details of the lives of the Irish saints. The harvest of his great labors were three large manuscripts—the first dealing with the kings of ancient Ireland, the second with her saints, and the third, Leabhar Gabaltas, with the social and political history of the Irish from the earliest times down to 1171. O’Clery’s masterpiece was The Annals of the Four Masters, so called because it was written under his direction by Fergus O’Conry, Peregrine O'Clery, and Peregrine O’Duignan, in the Franciscan Convent at Donegal, between January 22, 1632, and August 10, 1636. Hardly any other nation can boast such a treasure of information, O’Curry tells us. It was written in years of dire persecution. When the cruelty of England was unbearable, these annals of their glorious past brought strength and comfort to the suffering Irish.

How closely Louvain and Ireland were bound together during these years is evident from the fact that from the year 1560 no less than thirty-one Irish Bishops were educated in its schools. In that bead-roll of honor we meet the names of Creagh and Lombard of Armagh, O’Hurley of Cashel, and Egan of Ross all except Lombard martyred for the Faith. Thomas Stapleton, of Cashel, was a professor there in 1659, and afterwards Rector Magnificus. John Shinwick, of Cork, attained the  same dignity and was one of the most brilliant students of the great centre of learning. Later came Francis Martin, of Galway, and Martin Theige, of Limerick, both of whom became professors of Greek.

In the eighteenth century, as in the seventieth, Irish scholars continued to win fame in the schools of Louvain. In 1703, Christopher French was director of studies, and published theses on predestination against the Jesuits, Van der Voeaten and Livinus de Meyer. Christopher O’Connell wrote many works on questions of theology. Other Irish names conspicuous for learning and sanctity are Edmund de Burgo, Anthony de Burgo, Thomas de Tilly, John O’Heyne, Francis O’Hearn, William Gahan, James O’Shiell (Bishop of Down and Connor), and James O’Gallagher (Bishop of Raphoe).

Before the Danes ravaged Ireland thousands of scholars from the Continent flocked to the schools of the old Irish monks. The names of Muckross and Ardagh and Clonmacnoise had a European reputation in those far-away years when on her throne in the western ocean Erin held aloft the torch of learning, and showed a light to all the civilized world. Later, when her own schools were disbanded, her teachers banned, her priests hunted like wolves, the European nations did not forget the debt they owed to Ireland. In Salamanca, in Paris, in Rome, and in Louvain the exiled Irish were distinguished for their learning, and became in many cases teachers of the friendly nations which welcomed them. Luke Wadding remains one of the luminaries of the school of Salamanca; a McMahon is described as the most brilliant student in Rome: Father Michael Moore was one of the first scholars of Paris in the eighteenth century; and the names previously recalled show what Louvain did for Irishmen, and they in turn for Louvain.

Louvain like Ireland has had her awful visitation; and who more than Irishmen should sympathise with her? The other day we all read Cardinal Mercier’s noble Pastoral Letter, drenched with tears and vibrant with grief for the University which he loved so dearly. And how we, too, should feel it! How all English speaking Catholics should feel it! For to Louvain Ireland owes a great, incalculable debt: and it is not too much to say that to Ireland all the Church in the English-speaking world owes the Faith.

Posted by Marcella at 06:00 No comments: