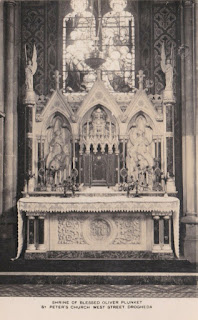 On June 29, 1921, the head of Saint Oliver Plunkett was translated from the Dominican Convent at Drogheda to its new home in Saint Peter's Church in the town. The report below from the Irish Rosary magazine gives a brief history of this famous relic and witnesses to the miracles attributed to other relics of Saint Oliver in England and France. The final paragraph reflects what is a very modern understanding of Saint Oliver as a peacemaker who testifies to 'the futility of un-Christian violence'. The head of Saint Oliver rested in this shrine until a new one was dedicated by Cardinal Daly on May 7, 1995. Professional examination of the relic in 1990 had shown that it was beginning to be negatively affected by high levels of humidity.  The head now sits within the 1921 brass and glass reliquary in a new inner capsule which allows better environmental control. Both are encased in a pedestal shrine made of steel and stone from which a gothic-style spire ascends to the ceiling of the Saint Oliver Plunkett chapel:

THE greatest Catholic event of the year in Ireland was the translation of the relic of Blessed Oliver Plunket from the Dominican Convent at Drogheda to the Plunket Church. The relic itself is one of the most remarkable in existence. Torturers and executioners did what was in their power to destroy the intellectual organiser of the Catholic revival that began in Ireland at a moment when the nation's Faith seemed on the point of being overthrown. Today the torturers and executioners are scattered in dust, but the head of the martyr beholds the triumph of the cause which his wisdom rescued.

After the martyrdom, Oliver Plunket' s body was cut down and disembowelled. The heart and other organs - such is the ferocity of persecutors in every age - were cast into the fire. The head was cut off. The arms were broken. The trunk was cut in quarters which four horses dragged asunder.

The history of the head is complete and incontestable. It was obtained by John Ridley, a surgeon, and a lady named Elizabeth Sheldon. When less violent years arrived Father Corker, who was imprisoned for the Faith, was granted freedom. And to him the head was given by those who had so reverently kept it. He had it enshrined in an ebony case with silver mountings, and took it with him to Rome.

In the year 1714 the head was brought to Ireland. Dr. Hugh McMahon, the martyr's second successor in the Primacy, carried it hither from Rome and commended it to the care of the nuns at the Sienna Convent, Drogheda, of which Mother Catherine Plunket, grandniece of Oliver, was then in charge. There it remained, covered by the simple ebony in which Father Corker first enclosed it. On the 29th of June last it was borne with ceremonial pomp to the Church which bears the great Archbishop's name and enshrined in a reliquary of noble workmanship, studded with precious stones.

Well-attested miracles were wrought by the remains of Blessed Oliver. Authentic portions of his remains were objects of veneration at different places. An arm bone was preserved at the Franciscan Convent at Taunton, where sickly children were made strong by its touch. Cases of goitre were also cured miraculously. In Paris the martyr's left arm attracted Catholic devotion, and fifteen years after his death it was observed that "the flesh, skin, hand, fingers, and nails were all as perfect and fresh as though still living."

Archbishop McMahon, writing in 1728, bore witness to other supernatural evidences. "The memory is quite fresh" he said "of those things which the most illustrious Oliver performed after his glorious martyrdom, resplendent with such wonders and miracles that his head and members, having been carried into different lands, remain whole and incorrupt, and breathe forth a fragrant odour."

Oliver Plunket, coming to Ireland to be its Primate, beheld a stricken country. The Irish Hierarchy was all but extinct. Anti-Catholic persecution was in the high tide of its rigour. He himself passed through the country under assumed names ordaining priests, confirming thousands of laity, organising schools, and consecrating chapels. The Government had its vast machinery of oppression. This man steadily, patiently founded a network of Catholic activity secret but virile that was to wear that machinery out. The persecutors caught him in the end. They dragged him to Tyburn and they killed him there. But he had lighted a torch which can never be extinguished.

Very opportunely the mind of Ireland is being directed towards the patriot martyr at this juncture. His Beatification and the honours paid to his holy head are symbols that prove the futility of un-Christian violence. Reflecting on them, the Irish people realise that oppression cannot thrive. They see in his spiritual victory an earnest that injustice shall not prevail against them. And they will hasten the coming peace by the invocation of his potent aid.