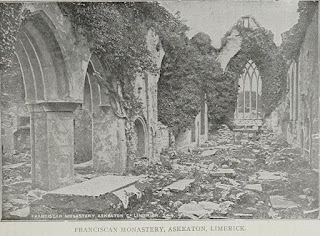 On the first day of January, 1579, Tadhg O'Daly from the Franciscan foundation of Askeaton, suffered death by hanging, drawing and quartering in the city of Limerick. The friar had been living in the 'interesting times' of the Elizabethan conquest of the province of Munster and accounts of his martyrdom were preserved in a number of Irish and continental sources. In his 1935 study of Irish martyrs Father Myles Ronan argued that the build-up to the rebellion launched by the returned exile James Fitzmaurice in 1579 forms the context for Friar O'Daly's execution:

It would be futile to try to number those who suffered for the faith during the years of expectation of the coming of Fitzmaurice to Ireland. The Munster people were in a fever of expectation. Letters were constantly passing between Spain and Kerry telling of efforts at the accumulating of forces. Hopes were shattered by disappointments.  If only Fitzmaurice would come, the Earl of Desmond thought all would be well. But he was disappointed with the support of the Munster chiefs, and he too temporised. But, all this time, there were men who did not fear to travel the countryside in their Franciscan habits. They were the friars of Askeaton, some sixteen miles west of Limerick. They were evidently in touch with events on the Continent, and their hopes loomed large. But they suffered for their enthusiasm for the faith. We have the report of Drury, President of Munster, to the Privy Council, March 24, 1578, for what happened:

There have been, to my judgement, since my first entry into office, about 400 executed by justice and martial law, within this province...Among the which a Friar was of late apprehended arraigned and hanged in his habit at Limerick for having about him certain letters with blanks, and the seals of several Friars in this province, with letters of commendation to the Provincial of Portugal, imparting seditious practices to be intended and he as a trusty messenger sent to negotiate. He was apprehended, being ready to depart to the sea into Portugal from the river of Limerick....

The friar referred to is evidently Brother Tadhg O'Daly, a native of Kinvarra, and a member of the Franciscan Friary at Askeaton. He was evidently the bearer of cryptic letters to the Earl of Desmond. At the time of his arrest he was wearing his religious habit publicly, and having refused, when asked to admit the Queen as Governor of the Church, he was conducted to Limerick, where he was hanged in his habit.

Commenting in 2004 on the report of the Elizabethan soldier and administrator Sir William Drury (1527-1579) quoted above, Irish Franciscan historian, Father Benignus Millett, confirmed that the threat of rebellion formed the backdrop to the execution of Brother Tadhg:

He [Drury] mentions the latest news on the James Fitzmaurice expedition, or crusade. In both Ireland and England crown officials were very worried about papally sponsored campaigns. And their official attitude to priests and religious had changed from 1576 onwards. They were convinced that they were dealing with less pliant Catholics than those confronting them at the beginning of Elizabeth's reign and they blamed priests, Jesuits and friars. They spoke about Catholic ill-will and disobedience and they also sponsored anti-Catholic propaganda. This propaganda would be reinforced by the execution of priests and friars.

He also confirmed Father Ronan's identification of Tadhg O'Daly with the anonymous friar mentioned by Drury:

In his report Drury records that he hanged a friar in his habit at Limerick (which the printed calendar of the report does not mention). This was Teige O'Daly, an Observant Franciscan priest, who in fact was the first priest and friar to be sentenced to death in the province of Munster in Elizabeth's reign.  With the evidence available in the Catholic sources there can be no doubt about the identification. All agree that he was put to death in Limerick. No friar other than O'Daly is known to have been martyred there in Elizabeth's reign.

Yet whereas Father Ronan seemed to hint that O'Daly was acting as a courier for the Earl of Desmond, Father Millett argued that the letters found on the friar had an entirely religious nature and purpose:

The Lord President notes that the friar had in his possession a letter recommending him to the provincial of Portugal and other letters with blank spaces and with seals. This does not mean that Drury was convinced that this Irish friar was a political subversive. The explanation was simple. O'Daly had decided that if the religious situation in Ireland deteriorated, he would take refuge overseas and he obtained from his minister provincial a letter of introduction and recommendation to the provincial of Portugal, where it was likely he would first arrive, and some blank letters of obedience, sealed and probably signed.  These would be necessary if O'Daly were to find himself in Spain or France or Italy and wished to receive hospitality from his Franciscan brethern, for he could present these letters in proof of his claim to be a genuine Franciscan, and not an imposter.

The removal of the suggestion that Friar O'Daly was acting as a secret conduit between the Earl of Desmond and potential European Catholic supporters for a rebellion in Ireland allows Father Millett to conclude that this execution should be viewed in a purely religious light:

The killing of this priest had a religious motive, not a political one. He was totally innocent of any treasonable activity. Drury, like other crown officials, was beginning to panic with the ever-increasing reports of an imminent expedition from Spain. The public execution of O'Daly was intended to strike terror into the hearts of the Catholic priesthood and laity.

Father Denis Murphy S.J. in his classic 1896 work Our Martyrs brings us an account of the death of Friar O'Daly based on the catalogues of Irish martyrs drawn up by Father John Howling, S.J. (d.1599) and Anthony Bruodin (d.1680). As we will see the martyrologists do not allude to letters at all as for them Brother Tadhg's real crime is the unashamed wearing of his religious dress and profession of his faith.  His arrest takes place at the friary rather than on a ship trying to escape the country and culminates in the ultimate crime of denial of the royal supremacy. He dies a true martyr's death, singing the Te Deum on his way to the scaffold and continuing to praise God even post mortem:

Brother Tadhg O'Daly, a native of Kinvarra, and a monk of the Order of St. Francis, was seized by the heretics in the monastery of Askeaton, because he wore the habit of his Order and made open profession of the Catholic faith. He was led, as if he were a robber or a traitor, to Limerick, sixteen miles off. There he was stripped of his habit and cast into prison by order of the President of the province. After nine weeks during which time he gave proofs of his attachment to the faith and of his constancy, he was brought to trial, many crimes being laid to his charge. But persevering in the confession of the Catholic faith, he was condemned to death by the verdict of twelve men, heretics and schismatics, because he would not admit that the Queen was Head of the Church. To all the promises and threats held out to him by the heretics, he replied with a smile, that no one on account of bodily torments or even death itself should separate himself from the friendship of God. 'I care not', he used to say, 'how you treat this mortal body of mine; the Almighty God has given you no power to injure my soul.' Again he was thrown into prison. There he was often visited by pious Catholics and by a certain holy priest, who obtained access to him in the dress of a layman; from him he obtained absolution of all his sins and received the Blessed Eucharist.

The heretics took him out of the prison, and binding his hands behind his back, had him tied to a horse's tail and dragged through the streets. But he showing not sorrow but delight, repeated aloud with great devotion the hymn: 'Te Deum laudamus'. On the way to the place of execution, he besought his friends who accompanied him, to obtain from the heretics that he should be allowed to wear his religious habit at the time of his death. These laughed at the request; but they granted it after a way, and ordered that the habit should be hung up too on the beam by the side of his body. After he had hung for a short time, he was taken down half-alive. Many of those who were standing by expressly stated that the martyr's head when cut off uttered these words distinctly: 'Lord, show me thy ways.' The fact is attested by Fr. John Good, S.J., who was then in Limerick, in his Theatre of Protestant and Catholic Religion.  And so the brave soldier of Christ earned the palm of martyrdom on January 1st, 1579.

The case of Friar Tadhg O'Daly was among those submitted to Rome and he is number 43 on the Official List of Irish Martyrs (1918).

Email ThisBlogThis!Share to TwitterShare to FacebookShare to Pinterest
Labels: Franciscan Martyrs, Irish Martyrs, Martyrs in Reign of Elizabeth I, Martyrs of Limerick