Saint Oliver Plunkett: 'The Only Real Cause of his Suffering was the Propagation of the Faith' 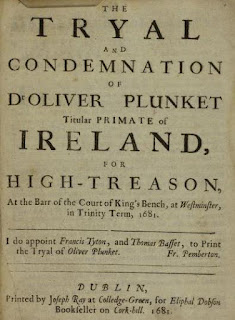 "Many Catholics do not hesitate to call him martyr, being convinced that he suffered for the Catholic faith, and though he was accused on three principal charges, as he himself writes: first of having sought to establish and propagate the Catholic faith; second, of having plotted the death of the King, third, of seeking to bring in the French. The second and third were only as means to obtain the first, as even the adversaries themselves laid down. In truth, they might be termed two chimeras, so that the only real cause of his suffering was the propagation of the faith, and he confessed publicly, in regard of the first accusation, that he had discharged the office of prelate ex aeque et bono without doing or seeking to do any injury to any being in the world.

"But as Boethius finds a place in the Martyrology for having defended the Catholic faith against the Arians, although the pretext of his death was an imaginary conspiracy against King Theodoric, and in like manner St. Hermenegild for having prosessed and sought to advance the true faith, although the pretext of his death was a similar conspiracy against King Leovigildus, and his kingdom, with the aid of the Greek emperor; so too they argue in the present instance. But it is not our province to decide this, Est qui judicet."