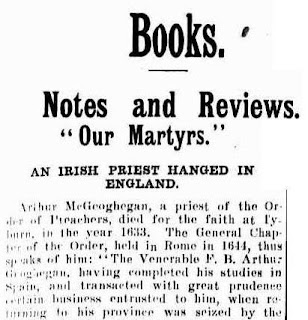 November 27, 1633 is the day on which an Irish Dominican priest trying to get back to Ireland from the continent was martyred at Tyburn. I have already posted an article by Father Reginald Walsh O.P. which gives the full background to the arrest of Father Arthur McGeoghegan here, but below is a reminder of his sufferings, taken from a book review in the April 30, 1908 edition of Australian newspaper The Catholic Press:

AN IRISH PRIEST HANGED IN ENGLAND

Arthur McGeoghegan, a priest of the Order of  Preachers, died for the faith at Tyburn, in the year 1633. The General Chapter of the Order, held in Rome in 1644,  thus speaks of him: The Venerable F. B. Arthur Geoghegan, having completed his studies in Spain, find transacted with great prudence certain business entrusted to him, when returning to his province was seized by the English heretics and cast into prison in London. He endured many calumnies from the heretics through hatred of the faith, and was brought to trial on a charge of high treason, as their custom is, and was condemned to death. At the place of execution he made open profession that he was a Catholic and a Dominican. He was hanged, and while still alive he was cut down, his limbs cut asunder, and his entrails burnt. And so so he ended his life gloriously in the year 1633.

His Trial and Death

We have several accounts of his trial and death, written at the time. The following one is taken from the Mostyn MSS., and was given in the Irish 'Ecclesiastical Record' for November, 1894: 'On Wednesday, the 27th of November, Arthur Gohegan was drawn on a hurdle from the King's bench to the City of London and so to Tiburne, from whence he was lifted off into a cart, where, undismayed, and with a fearless countenance, he spake these words: 'In manus tuus commendo spiritum meum, quia redemisti meae, O Deus veritatis meae,' which he often repeated. Then, desiring all good Christians to pray for him, he earnestly commended his soul to God, and said: 'Oh, thou glorious Virgin Mother of our Lord and Saviour, pray to thy Son .Jesus Christ to receive my soul; I would fain have received the Holy Sacrament, according to the injunction of our Order, but I could get no priest to give it me.' Then, being stripped to his shirt, holding up his hands to heaven with great earnestness, repeating:  'In manus tuus commendo spiritum meum, quia redemisti meae, O Deus veritatis meae,' the cart was drawn away, when he hanged a little time; then the rope was cut with a bill, the hangman holding him fast in his arms that he should not fall to the ground, at which time the cord being slack, he made a great noise in his throat. Then they laid him on the earth, drew him along (being alive) near the fire, threw there his bowels find heart, laid him afterwards upon his face, cut off his head by the neck, divided his body by the waist, and then cut it asunder into four parts, which were not dispersed on the gates; but some of his friends obtaining the disposing of them, and sent them over sea to be interred as he requested. He requested on the scaffold that his body be not dismembered, and that the Spanish Ambassador would send it to be buried in some abbey or place belonging to an abbey of St. Dominick.

Two days after his execution, Nicolaldi, the Spanish Ambassador, wrote: 'They hanged an Irish Dominican Friar here two days ago. He can enter into the number of the martyrs. I cannot send the account of the case now, but will do so another day, and they will see in Rome, whatever the French may say to the contrary about the trivial nature of the persecution here on account of religion, that this friar suffered for religion. His persecutors maliciously invented a pretext, and, all I could do with tho King and his Ministers was of no avail. The King was Charles I. and the Queen his wife was Henrietta, Maria, sister of Louis XII., King of France. In his 'Palma Fidei O.P.,' Father Mulphaeus, of the Order of Preachers, says 'that when Father McGeoghegan was returning to his native country from Lisbon, where he had lived for some time in the College of Our Lady of the Rosary, he landed in England. He was soon after accused in London of having said in Spain that it was lawful for anyone to kill the King of England. He was found guilty, hanged, and his heart and entrails cut out. But, on closer examination, when the matter had been brought under the notice of the Queen, though too late, he was declared, in a placard fixed up in the streets, to have been falsely accused, and condemned to death though innocent; and it was proved that he had not said what was laid to his charge, but only asserted when disputing with a heretic, who denied man's freewill, that nothing would be criminal or unlawful in human acts, not even tho killing of a King, if liberty did not exist. When the executioner was throwing Father McGeoghegan's entrails into the fire prepared for the  purpose, a certain young  man who stood by, seeing the liver of the martyr outside the fire, thrust it in with a stick which he had in his hand, and went away cursing the man himself and his religion; but he did not escape the avenging hand of God, for his sacrilegious hand immediately trembled, and he was struck down with such internal pains, that he was obliged to throw himself down on the nearest mound of earth.

The foregoing narrative is taken from an excellent work written by the late Rev. Denis Murphy, S.J., and entitled 'Our Martyrs,' being a record of those who suffered for the Catholic faith under the Penal Laws in Ireland. 'Our Martyrs' should be in every Catholic library. It can be easily procured from any respectable Catholic bookseller. The publishers are Fallon and Co, 10 Lower Sackville Street, Dublin. J.B.

Email ThisBlogThis!Share to TwitterShare to FacebookShare to Pinterest
Labels: Dominican Martyrs, Irish Martyrs, Irishmen Martyred in England, Martyrs in reign of Charles I