A Vision of a Suffering Soul 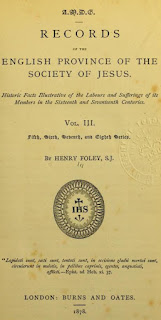 As November is the month in which we remember All Souls as well as All Saints, below is an account of a vision of a suffering soul experienced by the Jesuit martyr Father John Cornelius. This priest was born in Cornwall to Irish parents whose family name may have been Mohun or O'Mahoney. As a boy he was taken under the wing of the local lord Sir John Arundell, who sponsored his education and later studies for the priesthood at the English College in Rome. The Arundells were a prominent recusant family and on his return to England Father Cornelius became their chaplain, eventually being discovered in hiding at their home and executed in 1594. Father Cornelius was uncompromising in his attitude to the Reformation, while some priests were sympathetic towards those wealthy and powerful Catholics who attempted to hold on to their lands and titles by outwardly conforming to the new state religion, he refused even to say grace if a heretic was present at the table.  Lady Arundell had a son John, Lord Stourton (1553–1588) by her first marriage. Stourton was as convinced a Catholic as his mother and the Arundells but after an unsuccessful attempt to flee to the Continent in 1573, he submitted to the new religious regime and ended up agreeing to sit at the trial of Mary, Queen of Scots in 1586. Stourton was tormented by the decisions he had made and tried to have a priest on hand so that he may return to Catholicism on his deathbed. Sadly for him, he died without a priest but professed the Catholic faith openly to his family and in a private confession of his sins to a trusted servant. His mother, Lady Arundell, therefore approached Father Cornelius to say a Mass for the repose of the soul of her unhappy son. Her daughter Dorothy, Lord Stourton's half-sister, who wrote a Life of Father Cornelius gives us an eyewitness account of a vision which occurred during the Mass:

One day my mother, Lady Arundell, begged Father Cornelius to offer up Mass for the soul of her son John, Lord Stourton, which he consented to do. When at the altar he remained a considerable time in prayer between the consecration and the memento for the dead. After Mass he made an exhortation on the words, Beati mortui qui in Domino moriuntur, and then he told us that he had just seen a vision. Before him was presented a forest of immense size, in which all was fire and flame, and in the midst he perceived the soul of the deceased Lord who with tears and lamentable cries accused himself of the evil life he had led for several years especially whilst at the Court, and his dissimulation in frequenting the Protestant Church, though still a Catholic, to the scandal and grievous hurt of the souls of his relations. But above all, in the most bitter terms, he accused himself of having been one of the forty-seven chosen by Queen Elizabeth to condemn the innocent Mary Queen of Scots, a crime for which he had experienced so deep a contrition that it had hastened his death. After these avowals of the deceased Lord to Father Cornelius, he exclaimed in the words of Holy Scripture, Miseremini mei, miseremini mei, saltem vos, amici mei, quia manus Domini tetigit me — " Have pity on me, have pity on me, at least you my friends, for the hand of the Lord hath touched me." Having implored the Father to assist him with prayers, the appearance, by which he had been recognized, vanished. Father Cornelius wept much in relating his vision to us, and all the household, who to the number of about eighty persons were listening to him, united their tears with his. The server of the Mass, John Carey, afterwards a sufferer for the faith with Father Cornelius, saw and heard all that passed in the vision; but as for myself and the rest of those present, we only perceived, while it manifested, a glimmering reflection like that of live coals on the wall against which the altar stood.

Email ThisBlogThis!Share to TwitterShare to FacebookShare to Pinterest
Labels: Irishmen Martyred in England, Jesuit Martyrs, Martyrs in Reign of Elizabeth I