How an Irish Bishop Died for Faith and Fatherland 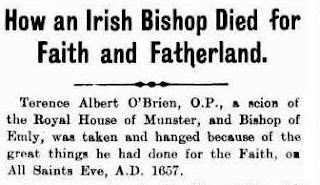 The hanging of the Dominican Bishop of Emly, Terence Albert O'Brien, O.P. on October 31, 1657, following the siege of Limerick, is one of the cases of Irish martyrdom which left a lasting impression on subsequent generations. In part I am sure this was because of the details preserved by the martyrologists of the time, most notably Bishop O'Brien's prediction that his persecutor, the Puritan General Ireton (who was Oliver Cromwell's own son-in-law), would soon be standing before God's tribunal himself. When Ireton contracted the plague ten days later it was reported that he said he had wished he had 'never set eyes on that Bishop' and attempted to distance himself from any responsibility for the execution. As a further testimony to Bishop O'Brien's status as a martyr, which would have been understood at the time, it is also recorded that fresh blood continued to drip from his severed head which did not show any signs of decomposition. All of these details feature in the article below published in an Australian newspaper in 1905. A year earlier the Archbishop of Dublin had opened the official inquiry into the Irish martyrs, something which was of interest to expatriate Irish communities. This well-written piece on Bishop O'Brien is attributed to 'J.B.' who concludes with the verdict that "He was taken and hanged, because of the great things he had done for the Faith."

How an Irish Bishop Died for Faith and Fatherland

Terence Albert O'Brien, O.P., a scion of the Royal House of Munster, and Bishop of Emly, was taken and hanged because of the great things he had done for the Faith, on All Saints Eve, A.D. 1657.

He was staying in the City of Limerick when that city was besieged by Ireton, the son-in-law of Oliver Cromwell. He was offered a bribe of 40,000 gold crowns, and a pass to any place he pleased, if he would quit the city, and cease to urge the citizens to resistance, all which he refused, preferring to give help to the Catholic people up to his death.

When the city was taken on the 29th of October, the articles of capitulation exempted twenty-four persons from quarter. Dr. O'Brien was one of these, and being arrested, he was brought before Ireton, who ordered him to be tried by a court-martial. When asked did he want counsel, he calmly replied that he knew his doom and only wanted a confessor. This boon was granted, and Father Hanrahan, a member of his own Order, was suffered to pass the whole day and night of the 30th October with the Bishop in his cell.

On the following day the finding of the Court was announced to him, as he lay stripped on a pallet; and the officer charged with this duty gave him to understand that the sentence was to be carried out on the instant. On hearing this, he got up to dress himself, but before he had time to do so, the Provost-Marshal's guard pinioned his arms, and thrust him out of the cell almost in a state of nudity. It was only natural that his fine sense of delicacy should resent this cruel insult, but finding that all remonstrances were even lost on the posse who surrounded him, he paused an instant as if to collect himself, and said in a solemn tone that "the time was not distant when Ireton should stand before God's tribunal to account for his bloody deeds."

It was a long way from the prison to the place of execution, and as the cortege proceeded, it was encountered at every step by sights the most appalling. For two days previously, Ireton's troops had been allowed to pillage and slay as they liked, and there was hardly a house that did not bear witness to their licentiousness. Windows shattered, doors wrenched from their hinges, corpses of men and women lying stark in the gutters, wares of every sort scattered and trodden under foot, showed that destructiveness had revelled to satiety. No living thing appeared along the route of that sad procession, and the universal stillness would have been unbroken were it not for the heavy tread of the doomed man's escort, and the ringing of their weapons as they clanked on the pavements.

The Bishop conducted himself with his accustomed firmness, and though distressed at being obliged to parade the deserted thoroughfares on that winter's evening in a state little short of absolute nakedness, his step was as steady and his bearing as erect as either could have been on that memorable day when he followed the trophies of Benburb to St. Mary's Cathedral.

On reaching the foot of the gibbet, he knelt and prayed till he was commanded to arise and mount the ladder. He obeyed, seized the rungs with vigorous grasp, and turned round as if anxious to ascertain whether any of the citizens had ventured abroad to witness his death scene. Having satisfied himself that a few of them were present, and within hearing, he exhorted them to continue true to the Faith of their fathers, and to hope for better days, when God would look with mercy on unhappy Ireland. To those who were weeping for him he said, "Do not shed tears on my account, but rather pray that in this last trial I may by firmness and constancy obtain heaven as my reward."

The persecutor, Ireton, to whom the Bishop had distinctly foretold that the vengeance of God would soon fall upon him, was struck down with the plague ten days after, and in his mad raving used to exclaim that the murder of the Bishop was the cause of his death; and turning his face to the wall, he used to mutter: "I never gave my vote for the death of the Bishop; it was the act of the Council of War. Would to God I had never set my eyes on that Bishop." Then, tortured by a guilty conscience, the wretch breathed forth his soul.

The martyr's head was fixed on a high pole on the top of the Castle. For a long time after, fresh blood dropped from it, and the skin and flesh were in no way changed.

He was a native of the city of Limerick, where his uncle, Maurice O'Brien, was Prior of the Dominican Convent. He himself later on succeeded to the same office. He went as Provincial to the General Chapter of the Order held in Rome in 1644, where, in acknowledgment of his services, he was made master of theology. He finished his studies in Spain, spending for that purpose eight years at Toledo. When the Chapter at which he was present in Rome had ended, he set out for Lisbon to visit the two convents of his Order in that city, one for Brothers, the other for Sisters. While at Lisbon, news reached him that he had been appointed Bishop of Emly by Pope Urban VIII.

From the Acts of the General Chapter of the Order of Preachers, held in 1656, we learn that in 1646 the number of Dominicans in Ireland was 600, that in 1656 the number was under 160 who were exiles from their native land, and that the others had been put to death at home, or had died a lingering death after their cruel banishment to the Barbadoes.

Of forty-three convents which the Order possessed in 1645, not a single one remained in their hands ten years later. The fury of the persecuting heretics had either levelled them to the ground or turned them to profane uses.

Dr. O'Brien was consecrated Bishop of Emly, 1647. He found his new See in a most deplorable condition, for the country had been ravaged and . desolated by Lord Inchiquin and his brutal soldiery. As a member of the Confederation, Dr. O'Brien had zealously supported the Papal Nuncio, and approved of his excommunication of the abettors of the Ormond party. In 1650 the progress of the Cromwellian army compelled him to retire to Galway. He returned to Limerick just before its siege by Ireton in 1657.

Famine, and the treachery of Colonel Fennell combined, compelled a surrender of the city on the 29th of October. The articles of capitulation exempted twenty-four persons from quarter. Amongst those was the illustrious Bishop. "He was publicly hanged," says Clarendon, "without any formality of justice, and with all the reproaches imaginable." "He was taken and hanged," says the Bishop of Clonfert, writing from Innesbofin on the 31st August, 1651 [?], "because of the great things he had done for the Faith." Suffering in such a cause is glorious beyond measure and meritorious beyond reckoning. "Tribulation," says St. Paul, "worketh above measure exceedingly, an eternal weight of glory."   J. B.