Translation of the Relics of Oliver Plunkett 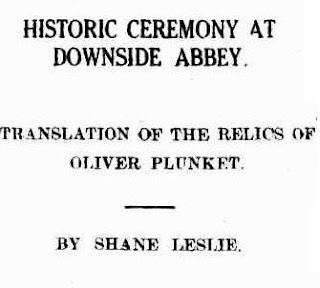 Earlier this year we looked at an article by Sir Shane Leslie (1885-1971) on the trial of Saint Oliver Plunkett.  Below we have another of Sir Shane's articles, this time a 1920 report on the translation of the relics of the newly-beatified Oliver Plunkett to the Benedictines' Downside Abbey. Whilst in prison Saint Oliver had entrusted his bodily remains to an English Benedictine fellow-prisoner, Dom Maurus Corker.  He took them into exile in Germany where, following the dissolution of the English Benedictine foundation at Lamspringe, the body of Saint Oliver came to rest in Downside in 1883. At that time the remains of the Irish martyr were placed in a plain stone tomb. In 1920 they were translated to a much grander purpose-built shrine. Sir Shane paints a vivid and dramatic picture of the proceedings where although everything was carried out with great dignity and solemnity, nevertheless there seems to have been an undercurrent of tension, given that the relics of Ireland's most famous martyr were in the possession of the English. Leslie, a convert to both Catholicism and Irish nationalism, describes Saint Oliver as a 'holy hostage' and regrets that his body does not lie at Armagh. Saint Oliver was martyred at Tyburn and thus his cause fell under the jurisdiction of the ecclesiastical authorities in London, with jurisdiction only being transferred back to Ireland early in the twentieth century when our own church authorities were organizing the causes of the native martyrs. The English could point out that the head of Saint Oliver, an important relic on display for veneration, had been returned to his homeland, where its translation to a new shrine at Drogheda formed 'the greatest Catholic event of the year in Ireland' in 1921. It is also true that Saint Oliver himself had bequeathed his remains to the English Benedictine, Dom Maurus Corker and that their survival owed much to the courage of English laywoman Elizabeth Shelton and others. Yet perhaps it was inevitable that there was some resentment on this issue given that renewed interest in the Irish martyrs and the organisation of their causes took place against the backdrop of the national revival and the campaign for independence.  Indeed, it was reported that during the beatification of Oliver Plunkett in 1920 the English Archbishop Stanley had been invited to celebrate Mass but was replaced by an Italian following objections by the Irish bishops. Sadly, exactly one hundred years after the publication of Sir Shane Leslie's article the much-reduced community at Downside announced that it would move away from its impressive home. Although the famous school at Downside is unaffected by this decision, it does make me wonder if the time might now be right for Saint Oliver's bodily relics to come home to Ireland?

TRANSLATION OF THE RELICS OF OLIVER PLUNKET.

It is Downside in the once Catholic west-country, yet hemmed by the memory of Giastonbury, and the Abbey Tower is flying the flag of Gregorius Magnus for the first celebration of the translation of the Relics of the Blessed Oliver Plunkett, October the sixth, 1920. Few of the faithful found their way to the remote hamlet in Somersetshire to witness what none else in England to-day except themselves have witnessed, the actual translation of the body of a Saint from the mundane grave or sarcophagus to the Altars of the Church. Probably the last translation to take place on English soil was that of St. Thomas de Cantilupe, whose head is one of the treasures of Downside Abbey. But the long spell has been broken, and a Saint, albeit an Irishman, has been solemnly translated within the Realm of England.

THE SHRINE OF THE NORTHERN TRANSEPT.

Cardinals and Bishops of England were present to do the Blessed Oliver honor, and Ireland seemed only represented by the weather, which wreathed the Abbey in sheets of rain, but during the High Mass and while the body of Oliver was being carried into the open air a gleam of sudden sunlight fell like a benediction from Heaven, making the yellow flag with the blood-cross of the Benedictines glow against the grey clouds like a flame of fire. Within the Abbey all was hush and expectation around the scaffolding leading to the highly poised shrine which has been built in the northern transept. It was an Irish Abbott, however, with forty years of choir behind him, who received the cardinals at the door. In black robe and train Cardinal Gasquet sang the High Mass in the presence of Cardinal Bourne, whose bright robes seemed terribly symbolic of the blood that England has shed. As the Cardinals sat back enthroned, the black monks, to whom the Martyr bequeathed his sacred body, raised the chant, whose, perfect modulation seemed at one time reminiscent of the Irish keening and at another of the proud triumph of Holy Church. With splendid emphasis the choir sang the great hymn of Peter and Paul, while to each stanza the whole of Downside School poured forth the chorus,

Who can ever now forget that those words were sung at the enshrining of Oliver Plunket? The Mass concluded, three Abbots in glorious apparel lifted the many-colored but acephalous body of Oliver from the Gospel side of the high altar and, preceded by the Comrnunity in their dark cowls and the Bishops of Clifton and Plymouth in purples, carried it down the choir and by the south door into the open air, preceded again by Cardinal Gasquet in cope and mitre and followed by Cardinal Bourne, as it were the chief mourner behind that radiant bier. At a distance, joining in the litanies of the Saints, came the school and the laity, and when, for a wonderful moment, the sunlight streamed upon all (the colours it seemed like a harlequin minglement of funeral and carnival, for there was no sign of mourning save in the Benedictine habits, and the cantors and bearers wore dalmatics, blue and yellow and purple. And the red pall over the relics became as bright as blood.

BROUGHT TO THE ABBEY FOR THE LAST TIME.

Preceded by crucifix and smoking censer, the Relics were brought slowly home to the Abbey for the last time, and who but the Catholic Church would honor dead and mouldy bones with what would have been the mockery of color and ceremony if she were not divinely aware that the undaunted spirit they once housed has ascended to the Father?

Slowly the Relics were brought to their appointed place, and then a strange and beautiful piece of pageantry was seen in the Abbey of St. Gregory the Great de Downside. Upon four high pillars in the northern transept had been set a finely gilded ark reached by ladder and scaffolding, and to this four monks in albs climbed up and let down ropes to the bearers. It was more than a symbol; it was a travesty of Tyburn played in mid-air. Were these four not the ghostly executioners who once stood and moved about a certain scaffold. Were those not the ropes of the gibbet, and was not that Tyburn running upward, or only pillars of stone? But that assuredly was the veritable body of the Martyr and eminent servant of God, Oliver Plunket, which was now a second time swinging between Heaven and earth. High above the chanting monks, above the sweet-toned choir, rose the holy body, caped in crimson and sealed with the seals of the Holy Church. But that crowd was no bloodthirsty mob, only monks and children, and these seated figures were the presiding Cardinals and not the evil and infamous Justices who condemned Oliver Plunket. After two centuries the Church re-enacted the event of his death at Tyburn, and of that brutal human crime seemed to show a divine parody. Upon no sledge of pain, but in a glorious shrine he was laid, and it was no knife that descended but a golden lid which was lowered by chains from the roof, and then it was seen that the scaffolding has only to fall away to reveal the Altars of God.

The monks descended the ladder, leaving Oliver to the centuries and once more a canonised Archbishop to the veneration of the folk. The sacrilege of Canterbury was repaired, and the Church once despoiled of the body of Thomas of Canterbury has enshrined the body of Oliver of Armagh. With sad and appropriate words Cardinal Bourne marked the occasion, deploring the tragic conditions prevailing in Ireland, and appealing to the blessed one to pray for Ireland and for England too! Then, after the intonation of the "Te Deum" the Cardinals and monks withdrew, but with what fresh force sounded the "Te Martyrum candidatus exercitus" and like a living flash from the organ, for the lonely body of a Martyr was there! In good keeping lies the Blessed Oliver Plunket. Though Irishmen would like him to have echoed the prayer of Brian Boru, 'My soul to God, and my body to Armagh!' yet he bequeathed his body to those, who have had it in their keeping and with whom it will now likely rest till the Judgment Day. Like a holy hostage Ireland's martyr remains in England and behind the golden bars of his prison shrine awaits the day when the England which gave him over to a cruel death will return to the Faith for which his life was given.

Already the long train of pilgrims has begun, and hardly was he enshrined than kneeling figures approached his mediation and candles began to flicker into flame like silent prayers. With exceeding joy the good monks sang Vespers, and late into night their Matins. Then there was silence in the Abbey. One by one the votive candles flickered out and the Martyr was left alone in his glory.