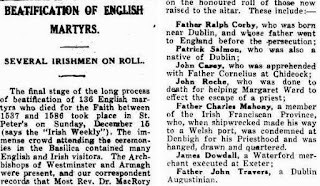 There is a distinct group of Irish Martyrs that I am keen to ensure are not overlooked at the blog - those who were martyred outside this country. The most famous is probably Saint Oliver Plunkett who was martyred at Tyburn in London in 1681, but the newspaper report below on the beatification of one hundred and thirty six English martyrs in 1929 introduces us to some other, less well-known names. I look forward to researching and writing about all of them.

The final stage of the long process of beatification of 136 English martyrs who died for the Faith between 1537 and 1586 took place in St. Peter's on Sunday, December 15 (says the "Irish Weekly"). The immense crowd attending the ceremonies in the Basilica contained many English and Irish visitors. The Archbishops of Westminster and Armagh were present, and our correspondent records that Most Rev. Dr. MacRory was the recipient of many congratulations on his elevation to the purple.

The ceremonies included the public reading of the brief, the chanting of the Te Deum and the unveiling of the images of the beatified.

It was under the penal laws, whose relaxation a hundred years ago has been the cause of this year's rejoicings among the faithful in England, Scotland and Ireland, that many of those who now receive the title of Blessed suffered death.

Ireland, again, has a particular joy in Sunday's ceremonies. It was an Irish Priest who was the first to suffer imprisonment in England under the new regime of persecution, and the last to suffer death at Tyburn was our own Blessed Oliver Plunket.

There are several other Irishmen on the honoured roll of those now raised to the altar. These include:—

Father Ralph Corby, who was born near Dublin, and whose father went to England before the persecution;

Patrick Salmon, who was also a native of Dublin;

John Carey, who was apprehended with Father Cornelius at Chideock;

John Roche, who was done to death for helping Margaret Ward to effect the escape of a priest;

Father Charles Mahony, a member of the Irish Franciscan Province, who, when shipwrecked made his way to a Welsh port, was condemned at Denbigh for his Priesthood and was hanged, drawn and quartered.

The causes of the English martyrs, of whom the original number presented was 360, began in the last, century and were presented to the Vatican in 1874. Leo XIII. approved the beatification of 54 in 1888 and of nine others in 1895. Of the remaining 297, the claim of 49 was considered not to have been proved, while 253 were admitted to the title of "venerable" — the first step in the process of canonisation. Of these 136 have now been beatified, and the Pope has expressly stated that the 116 who are left out of the decree must not be looked upon as ablati (or rejected), but dilati (delayed).

The roll of those now raised to the altar falls into three groups — 60 secular Priests, 30 members of religious orders and 46 laity, including, three women.