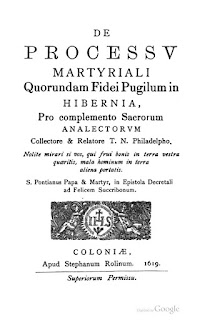 On this day, June 26, in the year 1580 Bishop Rothe records in his martyrology De Processu Martyriali that twenty-two elderly men were brutally killed in the village of Mohoriack in Munster.   His account was translated and reprinted by Myles O'Reilly in 1869. O'Reilly refers to Bishop Rothe as 'Philadelphus' since this was the pseudonym under which his 1619 catalogue of the martyrs was originally published:


TWENTY-TWO OLD MEN, WHOSE NAMES ARE NOT KNOWN.

Philadelphus mentions these as follows:

"I have also seen a catalogue in which are written the names of many lay Catholics who perished in consequence either of the fraud or calumnies of their enemies or the hatred of the orthodox faith which they professed. ... To these must be added from the same catalogue twenty-two old men, (Catholics) whom, being unable to fly, the fury of the soldiers burnt to death in the village of Mohoriack, in Munster, the 26th day of June, 1580."* — Philadelph., De Processu.

* Bruodin (lib. iii. cap. xx.) gives the name of the village as Ballymohun, in the diocese of Limerick.

Myles O'Reilly, 'Memorials of those who suffered for the Catholic Faith in Ireland in the 16th, 17th, and 18th Centuries. Collected and edited from the Original Authorities,’ New York, 1869, p. 70.

The catalogue to which Bishop Rothe refers was the first of the martyrologies to be compiled, the Perbreve Compendium of the Irish Jesuit John Howlin.  Father Howlin went into exile in Portugal in the late 1580s and died there during an outbreak of plague in 1599. He drew up a catalogue of forty-five Irish martyrs and knew at least one, Margaret Bermingham, personally. The Howlin catalogue was reprinted by Cardinal Moran but not with an English translation. The Latin original presents a fuller account than that of Bishop Rothe, it begins by stressing the utter decrepitude of the elderly victims who are left behind in the village of Mohomack. The soldiers who come across them interrogate their victims about their religious allegiances and whether the Queen or the Pope is head of the Church. When our old men declare for the Pope they are taken to a church dedicated to Saint Nicholas, the doors are shut and they are burned alive:


Rt. Rev. P.F. Moran, ed. Spicilegium Ossoriense: Being a Collection of Original Letters and Papers Illustrative of the History of the Irish Church from the Reformation to the Year 1800, First Series, (Dublin, 1874), 104-105.

The date of this incident would place our aged martyrs in the period of the Second Desmond Rebellion which began in July 1579. Their story illustrates some of the difficulties involved in investigating claims of martyrdom. The short account of Bishop Rothe might suggest that they are tragic victims of war. Father Howlin, by including their interrogation on the crucial question of royal versus papal supremacy, strengthens their portrayal as martyrs. As in the eyes of the Church a martyr is one who voluntarily embraces death for the sake of the faith, can we be entirely satisfied on the basis of this evidence that the test has been met? This is perhaps why the twenty-two old men are not among the cases which have been investigated formally by the Church and most probably never will be. I am proud to remember them here at the blog today and share the hope that their souls, tested and proven by fire, have now entered into the joys of heaven.