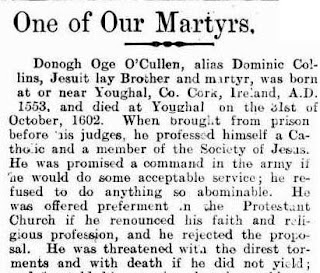 On October 31 1602 Jesuit lay-brother Dominic Collins was hanged, drawn and quartered in Youghal, County Cork. Born into a Gaelic aristocratic family, he had pursued a military career in both France and Spain but was drawn to the religious life. His bravery was matched by his humility and he entered the Society of Jesus as a lay-brother, feeling he was not worthy to be a priest. He returned to Ireland aboard a Spanish ship but was quickly captured and condemned to death. The account below has been taken from an Australian newspaper of 1909 and the author, "J.B.", testifies to the holiness of Blessed Dominic and the courage and steadfast faith with which he met his death as a martyr:

One of Our Martyrs.

Donogh Oge O'Cullen, alias Dominic Collins, Jesuit lay Brother and martyr, was born at or near Youghal, Co. Cork, Ireland, A.D. 1553, and died at Youghal on the 3lst of October, 1602. When brought from prison before his judges, he professed himself a Catholic and a member of the Society of Jesus. He was promised a command in the army if he would do some acceptable service; he refused to do anything so abominable. He was offered preferment in the Protestant Church if he renounced his faith and religious profession, and he rejected the proposal. He was threatened with the direst torments and with death if he did not yield; and he told his enemies that he could not serve two masters, and preferred to suffer and die for Christ rather than renounce his religious profession or do any thing against his conscience. When he could not be won by promises or threats, he was sent back to prison, and his relations and friends were prevailed on to visit him, and try and shake his constancy. When neither the the fair promises and dire threats of his enemies, nor the pleadings of his friends, availed to shake him in his resolve to live and die in the Catholic faith and in the Society of Jesus, he was sentenced to be hanged, to have his, entrails torn out while he was still alive, and have his body cut in quarters. He received this sentence with joy. His masterful self-possession and the rapturous happiness which radiated from his heart over his countenance so irritated his enemies that he was put to the torture repeatedly during the days previous to his execution, a thing which is contrary to all human and divine law.

He bore these dreadful torments as if they were a pleasure to him, and he was thankful for them as for special favours from heaven. His tormentors were so maddened at his sublime patience and power of suffering that they sent him to the gallows before the time fixed by the sentence of death, and hanged him on the 31st of October, 1602, even the Lord's Day, for which Protestants profess so much respect. He was led out from Cork amidst the prayers and tears of nearly all the citizens, and was conducted by soldiers to Youghal with his hands tied behind his back and a halter round his neck.

On his way to the place of execution he kept before his mind the picture of Our Lord going from Jerusalem to Calvary; he walked with great modesty and composure, his eyes fixed on heaven, his thoughts intent on God, his bearing dignified and showing great self possession. When he saw the gallows he saluted it with tender affection, and when he reached it he knelt down and kissed it, and then prayed to God for himself and his fatherland, and, after the example of the martyrs, he prayed also for the Queen and all his enemies. He then with great alacrity and a steady step went up the ladder. Standing on its top as if in a pulpit, he began more zealously than ever before to exhort the Catholics to preserve the faith with constancy till death, to be on their guard against the threats and promises of the Queen, the wrath of the Ministers, and the wiles of the heretics; and he concluded thus:

'Look up to heaven, and be not unworthy of your ancestors who boldly professed the faith; do you too uphold it. In defence of it I desire to give up my life to-day.'  These were his last words; they were most effective in encouraging the Catholics. Uttered in that place and at that solemn moment by one of high birth who had shown contempt for worldly goods, they fell like a thunderbolt on the ears even of the heretics. The officers, perceiving the effects of his words on the bystanders, and fearing that the crowd might be still more confirmed in their hatred of heresy, ordered him to be thrown off the ladder. He was but a short time hanging on the gallows, and still breathing and his breast heaving, when the executioner, in punishment of his bold profession of the Catholic religion, disembowelled him, cut his body in quarters, and tearing out his heart, held it up to the people, uttering the usual formula, 'God Save the Queen.'

The martyr's mangled and holy remains were collected with piety, reverence, and affection by the people of Youghal, and were religiously buried in a chapel close to the gate at which he was hanged. In that chapel he is honoured by the veneration of the faithful, and as the Catholics affirm, he is glorified by God, Who works miracles there at his intercession.

The O'Cullens were formerly Lords of Castlelyons and the surrounding territory, and our martyr, Donogh Oge O'Cullen, was chief of his clan in the 16th century; but Boyle, Earl of Cork, managed to get hold of his property, and in his last will left the suppressed monastery of Castlelyons to his daughter, Lady Barrymore, "to buy her gloves and pins." When Donogh, the youthful Irish chief, reached manhood, he went to France for the sake of more easily preserving his faith, and through a generous desire of defending the Catholic religion in that country he resolved to adopt a military career and to fight against the Calvinists who at that time were waging war against Catholicism with the sword as well as with voice and pen. When the war of the League came to an end, O'Cullen went in search of other services, and passed into Spain, where he was taken into the army of the Catholic King, and got a position suitable to his birth and merits. To this step he was impelled by a desire of military glory, and no doubt by a hope of returning to Ireland with a Spanish armada. His biographers tell us that he was made Capitan de la Armada, Real at Coruna, a port of Galicia.

While in this city he turned his attention more closely than heretofore to the practice of piety, and being free from the cares of war, he pondered over in his heart the vanity of transitory things and the inanity of human glory, and he began to realise the deep sense of joy, happiness, and hope which is found in serving under the standard of Jesus Christ. In order to wage war on the world, the flesh, and the devil, he frequently approached the Sacraments of Penance and the Holy Eucharist. He gave himself up to the reading of instructive and edifying books, and to the daily meditation of divine things, while he was a model of attention to his military duties, and he kept his body under subjection by fasting and continual corporal austerities.

As he continued this pious mode of life, he began by degrees to feel a desire to lead a life of still greater severity, and to view things of the other world in a different light.

Having made up his mind to enlist under the banner of Christ as his leader, he examined the Orders fighting for Him to see in which of them he should enrol himself. First he was attracted, by the mortified life of the Discalced Franciscans and by the strict observance of the Order of Preachers throughout Spain. Both these Orders, knowing his dispositions, would have conferred on him the order of the priesthood, but having recommended the matter to God long and earnestly, he determined to enter the lowly Society of Jesus, and to ask admittance as a humble temporal coadjutor. At St. James of Compostella he was received into the house of the Society on December 8th, 1598, and made his religious vows on February 4th, 1601. The next year he was appointed to accompany Father James Archer, S.J., who was to go with the fleet which the Catholic king was fitting out in aid of the Catholics of Ireland, under the command of Don Juan De Aguila. During the voyage he employed his zeal in caring both the bodies and souls of the sailors; attending on the sick night and day like a servant, and exhorting them to patience, urging on those who were in good health in the practice of virtue and horror of vice, and the use of the Sacraments. He continued his practices of mortification on shipboard, and when he landed in Ireland, as if he had no external labours to perform.

These voluntary mortifications prepared him, soul and body, to meet the sufferings he had to endure at the hands of the enemies of the faith. Soon after he landed at Dunboy Castle, he was seized and. put in chains by the heretics, contrary to the law of nations and in violation of their oath; for the besiegers had guaranteed the safety of all who defended the castle if they surrendered it, and had given a pledge, ratified by oath, into the hands of Dominic himself, who had proposed the terms of peace, and was the messenger of the besieged.

In February, 1905, the cause of beatification, of 350 Irish martyrs, amongst them Donogh Oge O'Cullen, alias Dominick Collins, S.J., was formally proposed to the Sacred Congregation of Rites, and it bids fair to obtain a successful issue, so that we may hope to see him and them beatified at no distant period.

Further information regarding Brother Collins may be found in 'Distinguished Irishmen,' by Edmund Hogan, S.J., and in 'Our Martyrs,' by Rev., D. Murphy, S.J.

Email ThisBlogThis!Share to TwitterShare to FacebookShare to Pinterest
Labels: Irish Martyrs, Jesuit Martyrs, Martyrs in Reign of Elizabeth I