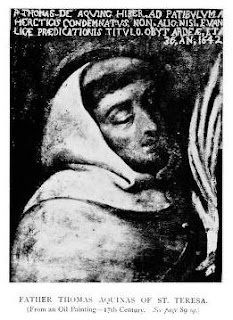 There are three Irish Carmelites whose names appear on the Official List of Irish Martyrs. I have previously written here about one of them - Englishman George Halley (Angelus of Saint Joseph in religion), who was killed in August 1642 at Drogheda. Today we turn to the case of Carmelite priest Father Thomas Aquinas of Saint Teresa, who was also martyred at Drogheda in 1642 with some sources giving June 6 as the date, others July 6. The account below has been taken from Father James P. Rushe's 1903 history of the Carmelite Order in Ireland. What is remarkable about the report of Father Thomas's martyrdom is that the Puritans who killed him not only subsequently accepted his innocence but also cherished the relics of his mantle and crucifix:

The signs of the vocation-grace must have been very evident in a postulant anxious to embrace the Teresian Reform at Dublin in the year 1635. For he was at once received into the community, being thenceforth known as Fra Thomas Aquinas of St. Teresa. The young novice was then in the twenty-third year of his age; his parents being Catholics, and residing in Dublin probably. From childhood Fra Thomas had been encouraged to devote himself to God in Religion; but it was after he had obtained a thorough education, and distinguished himself at college, that he felt called to the cloister. His fervour during the time of probation was most exemplary; not even the austerities of the Primitive Rule could satisfy his desire for mortification, which had, nevertheless, to be moderated by Obedience, — a virtue considered to be the basis of Religious perfection by the Discalced Carmelites. Having taken the Solemn Vows, Brother Thomas was sent to Drogheda to study for the priesthood. He must have been ordained there before the year 1641; because at the outbreak of the persecution in that city, he had already gained fame as a distinguished preacher.

The Puritans vainly thought that by arresting this popular Friar, and making an example of him, they could intimidate the resolute Catholics of Drogheda. But it was no easy matter to effect their purpose, as the Faithful grew daily more anxious for Father Thomas's safety; indeed his retreat might never have been discovered were it not for the treachery of a heretical servant.

Among the converts, whom the young priest had received into the Church, were the members of an influential family; a gentleman, his wife and son — an only child. On making open profession of their faith, the father and son were seized and cast into prison. Distracted with grief, the lady was on the point of simulating the errors of her persecutors, knowing that by doing so she could at least save the lives of her husband and son. Father Thomas heard of her deplorable state, and risking every peril, hastened at once to her assistance. He explained to her the grievous sinfulness of her design, which she immediately renounced, resolving to trust those dearest to her to God's loving care. And, acting on her director's advice, she resolved to escape the vengeance of the Puritans by flight. The annalists do not say whether so beautiful a spirit of Christian resignation was rewarded on earth by the happy reunion of those fervent converts.

Father Thomas Aquinas of Saint Theresa is number 148 on the Official List of Irish Martyrs (1918) whose causes were submitted for official consideration. No further progress has been made.

Email ThisBlogThis!Share to TwitterShare to FacebookShare to Pinterest
Labels: Carmelite Martyrs, Irish Martyrs, Martyrs in reign of Charles I, Martyrs of Drogheda