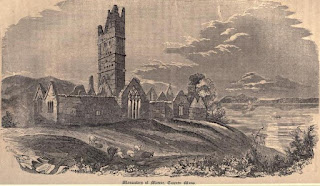 Recently we looked at the cases of two martyrs from the Franciscan monastery of Moyne, County Mayo and today we look at a third, a man described by Father Thomas Walsh in his 1856 History of the Irish Hierarchy as 'the John Nepomucene of Ireland'. For Irish Franciscan priest, John O'Dowd, is also remembered as a martyr for the Seal of the Confessional. Cardinal Moran, who did much to reawaken interest in the Irish martyrs during the nineteenth-century, wrote a succinct summary of his case giving the date June 9, 1577 as the day of Father O'Dowd's martyrdom and the Elizabethan conquest of Connacht as its backdrop:

The convent of Moyne, in Mayo, was rendered illustrious in 1577, by the heroism of Father O'Dowd. The soldiers of Fitton (then president of Connaught) had occupied that convent, and some of their prisoners having made their confessions to that courageous father, they seized on him, and by promises and threats, sought to induce him to reveal to them the secrets which he had heard. His refusal kindled their demoniac ferocity, and binding the cord of his habit around his head, they forced and screwed it till his eyes burst from their sockets. Under this frightful torture he expired on the 9th of June, attesting by his martyrdom the inviolability of the sacred sacramental seal.

A number of Franciscan writers recorded the martyrdom of Father O'Dowd. In 1869 Myles O'Reilly drew on the account of Donatus Mooney O.F.M. (c.1577-1624), himself a survivor of the attack on Donegal Friary in 1601. He was appointed Provincial of the Order in 1615 and undertook an official visitation to all of the Irish Franciscan foundations. Father Mooney spoke to eyewitnesses who testified to the horrible death suffered by Father O'Dowd, even if the passage of time had blunted their memories of his name and the location of the monastery:

Father Mooney did not know the name of this martyr, which, however, we learn from other authorities; but I give his account as the fullest and most authentic, as it was derived from the actors in the tragedy. He also states it to have taken place in the convent of Elphin, in the episcopal city  of Elphin, while others lay the scene in the convent of Moyne, in the county of Mayo. Clearly the English soldiers who assisted at the massacre and narrated it to Father Mooney knew little of the name of the place where it occurred or of the priest whom they saw slain; but they are the very best authorities as to the fact having taken place. Father Mooney thus narrates the event:

"In this same convent, on another time, certain English soldiers seized a certain priest of our order and some other prisoners. They pressed a certain secular, who was one of their captives, to tell them something of the plots which they said. he had made with others against the Queen of England; but he protested he could tell nothing but the truth, and that there were no plots; so they determined to hang him. When they said this, he begged he might be allowed to make his confession to the brother; this they granted the more readily that they thought the priest, if he were tortured, would reveal what might be told him. As soon as the confession was over, the secular was hung; and then they asked the priest, who was also to be hung, if he had learned aught of the business in confession. He answered in the negative, and, refusing to reveal anything of a confession, they offered him life and freedom if he would reveal, and threatened torture if he refused. He answered he could not, and they immediately knotted a cord round his forehead, and, thrusting a piece of wood through it, slowly twisted it so tightly that at length, after enduring this torment for a long time, his skull was broken in, and, the brain being crushed, he died. I have seen and examined ocular witnesses of this fact, who were serving in that body of English troops, and sought absolution from me; but they did not remember the name of the brother or the exact year; but it was about 1577." — Mooney, p. 35.

In his 1896 compilation Our Martyrs, Father Denis Murphy SJ used the account of Louvain scholar Luke Wadding, O.F.M. (1588 – 1657). Wadding follows the Mooney narrative for the most part but adds the detail that Father O'Dowd prayed to God and the Blessed Virgin Mary throughout his ordeal:

In our convent of Elphin, some English soldiers seized a certain priest of our Order and some other persons. They pressed a layman, who was one of their captives, to tell something of the plots which they said he had entered into with others against the Queen of England; but he protested he could tell nothing but the truth, and that there were no such plots. So they determined to hang him. He begged that he might first be allowed to make his confession to the priest. This they granted readily, because they thought that if the priest was put to the torture, he would reveal what was told him. As soon as the confession was ended the layman was hanged, and then they asked the priest, who was also to be hanged, if he had learned anything of the business in the confession. He answered in the negative, and refused to make known anything which he might have heard in the sacred tribunal. They offered him life and freedom is he would reveal what he had heard, and threatened him with torture if he refused. He answered that he could not.

Immediately they knotted a cord round his head, and putting a piece of wood through it, slowly twisted it so tight that at length, after he had endured this torment for a long time, his skull was broken in and his brain crushed. All this time he was praying to God and to the Blessed Virgin Mary. He died on the spot. I have seen and examined ocular witnesses of this fact, who were then serving in that body of English soldiers. But they did not remember the name of the friar or the exact year. It was about 1577. Ward gives 1579 as the date of his death.

Ward is a reference to Donegal native Hugh Ward, O.F.M. (c.1593 –1635), also a scholar at the Irish College of Louvain. His testimony confirms the main details but associates Father O'Dowd with Moyne and suggests 1579 as the year when these shocking events took place:

Fr John O'Dowd, of the Convent of Moyne, having heard the confessions of some of the faithful, was seized by the English heretics and put to the torture at different times, to compel him to reveal what he heard in confession. They put a rope round his head and tightened it with a stick, until his eyes were forced out and his brains were driven out through his ears. All the time he was praying to God and to the Blessed Virgin Mary. He was then put to death - 1579.

I am unsure where Cardinal Moran sourced the date of June 9 as the day of Father O'Dowd's martyrdom but was pleased to learn that according to the book Archdioceses and Dioceses of Ireland published by Veritas in 2000, the death of John O'Dowd on June 9, 1579 is still remembered locally.

Email ThisBlogThis!Share to TwitterShare to FacebookShare to Pinterest
Labels: Franciscan Martyrs, Irish Martyrs, Martyrs in Reign of Elizabeth I, Martyrs of Mayo