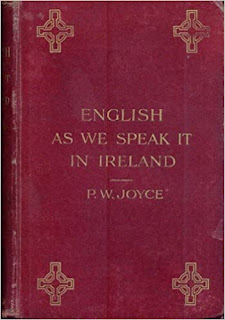 If the 'Mass Rock' is the leading iconic image of the Irish Catholic experience in the Penal Times, then perhaps the 'Hedge School' could be said to run it a close second. Elite Catholic families could pay to have their sons educated at colleges and seminaries abroad, but what of those who could not afford the luxury of a continental education? In the article below, taken from The Sacred Heart Review of 1910, Irish scholar P. W. Joyce (1827-1914) describes not just the history of the hedge schools but also his own experience of them. For some of these schools survived well into the nineteenth century, years after the legal restrictions which gave rise to them were abolished. Inevitably, the quality of teaching could vary, but for Joyce the hedge school reflected the native love of learning in Ireland, the "Island of Saints and Scholars":

Dr. P. W. Joyce, M. A., the well-known Irish author, has lately published a notable work, entitled "English as We Speak it in Ireland," one of the most interesting chapters in which is the description of his own schooldays in those times when the schoolmaster was not so much abroad as at the present time. Evil memories of the bad old penal days (he says) come down to us clustering around the the term "hedge-schools". At the end of the seventeenth century, among many other penal enactments, a law was passed that Catholics were not to be educated. Catholic schoolmasters were forbidden to teach, either in schools or in private houses; and Catholic parents were forbidden to send their children to any foreign country to be educated—all under heavy penalties; from which it will be seen that care was taken to deprive Catholics— as such—altogether of the means of education. But the priests and schoolmasters and people combined all through the country—and not without some measure of success—to evade this unnatural law. Schools were kept secretly, though at great risk, in remote places—up in the mountain glens or in the middle of the bogs. Half a dozen young men with spades and shovels built up a rude cabin in a few hours, which served the purpose of a schoolhouse; and from the common plan of erecting these in the shelter of hedges, walls, and groves, the schools came to be known as 'Hedge Schools.' These hedge schools held on for generations, and kept alive the lamp of learning, which burned on—but in a flickering, ineffective sort of way—"burned through long ages of darkness and storm" till at last the restrictions were removed, and Catholics were permitted to have schools of their own openly and without let or hindrance. Then the ancient hereditary love of learning was free to manifest itself once more; and schools sprang up all over the country, each conducted by a private teacher who lived on the fees paid by his pupils. Moreover, the old designation was retained; for these schools, no longer held in wild places, were called—as they are sometimes called to this day—"hedge schools."

The Schools of Munster.

The schools that arose in this manner, which were of different classes, were spread all over the country during the eighteenth century and the last half of the nineteenth. The most numerous were little elementary schools. The higher class of schools which answered to what we now call intermediate schools, were found all ever the southern half of Ireland, especially in Munster. Some were for classics, some for science, and not a few for both; nearly all conducted by men of learning and ability; and they were everywhere eagerly attended. Many of the students had professions in view, some intended tor the priesthood, for which the classical schools afforded an admirable preparation; some seeking to become medical doctors, teachers, surveyors, etc. But a large proportion were the sons of farmers, tradesmen, shopkeepers, or others, who had no particular end in view, but, with the instincts of the days of old studied classics or mathematics for the pure love of learning. These schools continued to exist down to our own time, till they were finally broken up by the famine of 1847. In my own immediate neighborhood were some of them, in which I received a part of my early education; and I remember with pleasure several of my old teachers; rough and unpolished men many of them, but excellent solid scholars and full of enthusiasm for learning—which enthusiasm they communicated to their pupils. All the students were adults or grown boys; and there was no instruction in the elementary subjects—reading, writing, and arithmetic—as no scholar attended who had not sufficiently mastered these. Among the students were always half a dozen or more "poor scholars" from distant parts of Ireland, who lived free in the hospitable farmers' houses all round; just as the scholars from Britain and elsewhere were supported in the time of Bede— twelve centuries before.

The year before going to Mitchelstown I attended a science school of a very different character kept by Mr. Simon Cox in Galbally, a little village in Limerick under the shadow of the Galtee Mountains. This was a rough sort of school, but mathematics and the use of the globes were well taught. There were about forty students. Half a dozen were grown boys, of whom I was one; the rest were men, mostly young, but a few in middle life—schoolmasters bent on improving their knowledge of science in preparation for opening schools in their own parts of the country. In that school, and indeed in all schools like it through the country, there were "poor scholars," a class already spoken of, who paid nothing—they were taught for nothing and freely entertained, with bed, supper, and breakfast in the farmers' houses of the neighborhood. We had four or five of these, not one of whom knew in the morning where he was to sleep at night. When school was over they all set out in different directions, and called at the farmers' houses to ask for lodging; and although there might be a few refusals, all were sure to be put up for the night. They were expected, however, to help the children at their lessons for the elementary school before the family retired. In some cases if a farmer was favorably impressed with a poor scholar's manner and character he kept him—lodging and feeding him in his house—during the whole time of his schooling—the young fellow paying nothing, of course, but always helping the little ones at their lessons. As might be expected, many of these poor scholars were made of the best stuff; and now I have in my eye one who was entertained for a couple of years in my grandmother's house and who subsequently became one of the most respected teachers in Munster. Let us remark here that this entertainment of poor scholars was not looked upon in the light of a charity; it was regarded as a duty, for the instinct ran in the people's blood derived from the ancient times when Ireland was the "Island of Saints and Scholars." It was a custom of long standing; for the popular feeling in favor of learning was always maintained, even through the long dark night of the Penal Laws.