Opposing the Reformation: A Seditious Sermon in Donegal, 1539 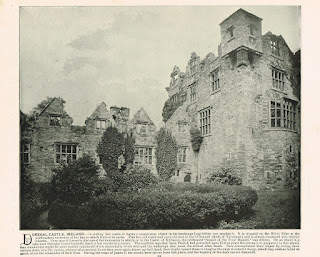 Recently while listening to one of the many interesting talks from the Tudor and Stuart Ireland site, I had my curiosity piqued by a paper from their 2018 Conference entitled 'An Anonymous Sermon made in opposition to King Henry VIII’s Reformation recorded in Donegal in 1539 – Can the Franciscan Friar who gave it be identified?' The podcast is available here. Speaker Dr Darren McGettigan described a report from a Galway merchant, Thomas Lynch, present in 1539 in 'Odoneles countrey' when he heard what was to him a most alarming sermon from an unnamed preacher, presumably one of the community of Francsican Observant friars at Donegal town, the O'Donnell capital. As a Gaelic urban centre Donegal town was unusual in sixteenth-century Ireland, since most Irish towns and cities at this time were to be found within the Pale and other centres of English influence. The Franciscan friary was under the patronage of the O'Donnells who among other things made sure the friars were supplied with wine, the very reason why our Galway merchant was in their locality. Lynch reported to the authorities that the friar's message was that for the salvation of his soul every man ought to rise up against the King, adding if he died during the conflict his soul would go to heaven just as had the souls of Saints Peter, Paul and others who had suffered death and martyrdom for God's sake. When Lynch objected he appears to have been forcibly ejected from the church 'for a heretic' and described himself as 'greatly afraid'. His original report has been preserved in the State Papers:

The Confession of Thomas Lynch, of Galway, marchaunte, late being in Odoneles countrey with a ship of wynes:

"Item, the friers and preestes of all the Yrishtree, not onely of Odownelles countrey, but all other wheres as I was, do preache dayly, that every man ought, for the salvacion of his sowle, fight and make warr ayenste Our Soverayne Lord the Kinges Majestie, and his trewe subjectes; and if any of theym, which soo shall fight ayenste His said Majestie, or his subjectes, dy in the quarrell, his sowle, that so shalbe dedd, shall goo to Heven, as the sowle of Saynt Peter, Pawle, and others, which soffered death and marterdom for Godes sake. And forasmoch as I ded travers somwhate of souche wordes, I was caste oute of church, and from theire masses, duering a certen tyme of daies, for an heretike; and I was gretly afiraide"

But who was the unnamed preacher whose words so alarmed Lynch? Dr McGettigan suggests that one possible candidate could be a Donegal Franciscan with a particular reputation for sanctity: Friar Bernard Mac Grath, who died c. 1549.  Friar Bernard was from the family of the Mac Graths of Termonmacgrath in the diocese of Clogher, the hereditary custodians of the sanctuary of Saint Patrick's Purgatory at Lough Derg. Another Donegal Franciscan, Father Donatus Mooney (c.1577-1624), bore witness to Friar Bernard's holiness and miracle-working abilities in a manuscript history of the Irish Franciscans. However, it is not his reputation in these areas which leads Dr McGettigan to suggest him as a plausible candidate for the deliverer of the seditious sermon of 1539, but rather for his ability as a preacher, something Father Mooney also recorded:

The fame of this man’s sanctity and wisdom soon sped beyond the borders of Tirconnell, and reached the ears of Gerald, earl of Kildare, who was then lord deputy. Desirous of ascertaining what credit he should give to the marvellous anecdotes related of father Bernard, the earl summoned him to Drogheda, to preach in the presence of his entire court. Bernard obeyed; and so charmed was Kildare with his eloquence and piety, that he not only invited him to dine at his table, but gave him precedence of all his nobles.

When we consider the fact that the preacher would have had to make a journey of over one hundred  miles to the Pale in order to deliver his sermon, it seems likely that only someone with a reputation of being worth the hearing would have been invited to do so.

Certainly the message of the anonymous preacher would have met with the approval of another member of the O'Donnell clan, Rory (Roderick) O'Donnell, the Dean of Raphoe who became Bishop of Derry in 1529. He too was the subject of hostile comment in the State Papers for writing what McGettigan describes as a 'blistering letter' with a litany of complaints about the behaviour of the English Lord Deputy to the Pope:

This bishop was very much opposed to the religious innovations which Henry VIII. endeavoured to introduce into the Irish Church. In the State Papers (vol. i. pag. 598) there is a letter dated 14th March, 1539, and addressed by Lord Cromwell to the English king, in which the following eulogy is passed on Dr. O’Donnell: “Also there be letters long from an arrant traitor, Rorick, Bishop of Derry, in your grace’s land of Ireland, his hand and great seal at it, to the Bishop of Rome, declaring the calamities of the Papists in Ireland”.

Bishop O'Donnell was also a supporter of military resistance to Henry VIII's religious policies and was one of the delegates who made overtures to the Scottish King seeking support for the cause of the young heir to the Earldom of Kildare following the execution of Silken Thomas in 1537:

It was in the preceding year that Bishop Roderick had mortally offended the agents of King Henry by his efforts to preserve from their grasp the youthful Gerald, who, though yet in his boyhood, was chief of the Geraldines, and destined, it was hoped, to become one day the rallying point of a confederacy of the Irish chieftains. In the month of May Gerald and his faithful escort passed without molestation from the south to the north of Ireland, being hospitably received in Thomond, Galway, and Sligo; and they were safely entrenched within the barriers of Tyrconnell before the government spies had even caught the intelligence of this journey. On the 28th of June the Earl of Ormonde wrote a long letter to the council of Ireland, giving information of the movements of young Gerald. From this letter we learn that it was an Irish rhymist that acted as his spy amongst the Northern chieftains, and that, according to the latest intelligence received from him, "twenty-four horsemen, well apparrelled”, had been appointed to wait upon the young Geraldine. The King of Scotland, too, solicited the Irish princes to commit Gerald to his care. However, in another letter, of 20th July, the same earl writes that this scheme was not pleasing to O’Neil and O’Donnell, but the Bishop O'Donnel (of Derry), James Delahoyde, Master Levrous, and Robert Walshe, are gone as messengers to Scotland, to pray aid from the Scottish king; and before their going, all the gentlemen of Ulster, for the most part, promised to retain as many Scots as they should bring with them, at their own expense and charges during the time of their service in Ireland” — (St. Pap ., iii. 52).

In the event, The Geraldine League was short-lived. Manus O'Donnell and Conn O'Neill launched a raid on the Pale in the autumn of 1539 and were caught by the English Lord Deputy and his army on their way home. Lord Grey inflicted a decisive defeat on the Irish forces at the Battle of Bellahoe where they lost four hundred men and all of the spoils from the raid. The two great northern chieftains were left to come to terms with King Henry VIII and O'Donnell's enthusiasm for the Geraldine cause cooled.

The sermon of the anonymous friar of 1539 can thus be placed in a wider context of opposition within Donegal to the religious changes instituted by King Henry VIII. Our friar, whether or not he was Bernard Mac Grath, was clearly not alone in his conviction that armed resistance to the Reformation was a righteous cause.

Email ThisBlogThis!Share to TwitterShare to FacebookShare to Pinterest
Labels: Opposition to the Reformation