Father Fergal Ward, O.S.F.: 'hanged with the cincture of his own habit'. 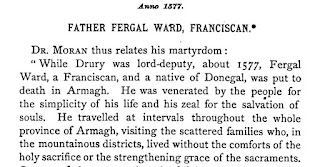 On April 28 in the year 1575, according to some sources or 1577 according to others, the Franciscan guardian of Armagh, Fergal Ward, was beaten and hanged. The Franciscan friary at Armagh was founded in 1263/4. It was included in the monasteries ordered to be suppressed in 1542 and in 1557 was reported to have been surrendered.  The friars remained in the local area though and in 1565 two were flogged to death through the streets of Armagh. A report of 1586 in the Calendar of State Papers speaks of 'Armagh, a small village; the church and friaries are all broken and defaced.' Father Donatus Mooney O.F.M. wrote in 1616 that 'the convent of Armagh was destroyed in the late wars'. Indeed, in 1596 the ruins of Armagh friary had been used by Con O'Neill to mount an attack on the English forces seeking to supply their garrison in the town. So the execution of Father Fergal Ward is set against the backdrop of these decades of religious, political and military upheaval. Below are two accounts of his martyrdom. The first is from Bishop P.F. Moran's 1864 History of the Catholic Archbishops of Dublin, using Franciscan records. It gives a glimpse into the hardships faced by Friar Fergal as he attempted to exercise his ministry in extraordinarily difficult circumstances. His capture illustrates how vulnerable Catholic priests and religious were to the rough justice of martial law, for he appears to have been seized by soldiers and executed without any form of legal process. He is also reported to have been hanged using the rope cincture of his habit, a detail commonly found in accounts of the killings of members of religious orders:

"While Drury was lord-deputy, about 1577, Fergal Ward, a Franciscan, and a native of Donegal, was put to death in Armagh. He was venerated by the people for the simplicity of his life and his zeal for the salvation of souls. He travelled at intervals throughout the whole province of Armagh, visiting the scattered families who, in the mountainous districts, lived without the comforts of the holy sacrifice or the strengthening grace of the sacraments. On one of these excursions he fell into the hands of the soldiery, and, being scourged with great barbarity, was hanged from the branches of a tree with the cincture of his own religious habit.

*From Dr. Moran's History of the Archbishops of Dublin, Introduction, p. 141, where he quotes Synop. Prov. Franciscan. in Hib. p. 66. The same account is given by Bruodin, lib iii. cap. 20, where he refers to John Good's work.

The second account is drawn from Anthony Bruodin's 1669 catalogue of Irish martyrs, Propugnaculum Catholicae Veritatis. It confirms the details of Friar Fergal Ward's beating and hanging, although here the blame is placed on the 'Ministers of Elizabeth' and some variant dates are given for the year of his execution:

Fergall Ward, a native of Tyrconnell, a member of the Seraphic Order of St. Francis, was a very eloquent preacher and most observant of poverty. He had laboured zealously for three years in the vineyard of the Lord, and was then promoted to be Guardian of the convent of Armagh about the year 1575. At this time the plague of heresy, introduced by Elizabeth, was raging throughout Ulster. Ward opposed it as a skilful physician. Wherefore be was seized by the Ministers of Elizabeth, and no regard being had for his great age or religious character, he was scourged cruelly and beaten. At length when the holy martyr, persevering in his good purpose, exhorted his executioners to return to a better life, by order of the ministers he was hanged with his own girdle on the 28th of April, 1575, as Father John Good writes, or in 1565, as Wadding states in his work on the Martyrs of the Order.

Father Fergal Ward O.S.F. is number 38 on the Official List of Irish Martyrs (1918) whose names were submitted to Rome for official consideration. No further progress has been made with his cause.

Email ThisBlogThis!Share to TwitterShare to FacebookShare to Pinterest
Labels: Franciscan Martyrs, Irish Martyrs, Martyrs in Reign of Elizabeth I, Martyrs of Arnagh

Thank you for this. From Limerick 🇮🇪

Glad you found it of interest.