Father Aeneas Penny: 'slain in the act of celebrating the Mass' 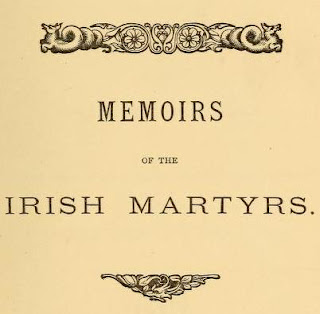 On May 4, 1582, Father Aeneas Penny was cut down by soldiers while celebrating Mass in his parish church. There is not a great deal of information about this martyr, but he is among those recorded by the Irish Franciscan Anthony Bruodin in his 1669 work Propugnaculum Catholicae Veritatis. Bruodin's short account was translated by author Myles O'Reilly in his own work on the Irish martyrs published two centuries later:

"A priest of Connaught, was slain by the heretical soldiers, in the act of celebrating the holy sacrifice of the Mass, in his parish church of Killatra, the 4th May, 1582." — Bruodin, lib. iii. cap. xx.

Father Denis Murphy S.J. also published Bruodin's account in his 1896 Our Martyrs, but notes that the townland of 'Killatra' cannot be traced and mentions that another martyrologist, John Copinger, had also listed the case of Father Penny. Like Anthony Bruodin, Copinger was also an Irish priest in exile on the Continent. He published a catalogue of Irish martyrs in the reign of Elizabeth I as part of his 1620 work The Theatre of Catholique and Protestant Religion. In his even more succinct listing, Copinger renders the name of the martyr's parish as 'Killagh':

Eneas Penny parish priest of Killagh, slaine at the alter in the parish church therof.

Father Aeneas Penny is number 12 on the Official List of Irish Martyrs (1918) whose names were submitted to Rome for official consideration. No further progress has been made with his cause.

Email ThisBlogThis!Share to TwitterShare to FacebookShare to Pinterest
Labels: Irish Martyrs, Martyred Priests, Martyrs in Reign of Elizabeth I