The De Profundis and the Irish Martyrs 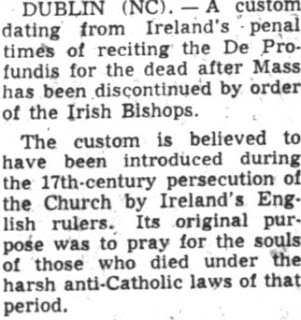 On November 15, 1960 a decision taken by the Irish bishops at the Synod of Maynooth held four years earlier came into effect. It abolished the recitation of the De Profundis (Psalm 129) after the Mass, a liturgical practice peculiar to Ireland. A report of the decision appeared in the American Catholic paper The Catholic Standard and Times the following month:

DUBLIN (NC). —A custom dating from Ireland's penal times of reciting the De Profundis for the dead after Mass has been discontinued by order of the Irish Bishops.  The custom is believed to have been introduced during the 17th-century persecution of the Church by Ireland’s English rulers. Its original purpose was to pray for the souls of those who died under the harsh anti-Catholic laws of that period. Recitation after Mass of the De Profundis, the 129th psalm, was peculiar to Ireland. The Bishops decided to abolish the custom in 1956 at the Synod of Maynooth. Decrees resulting from the synod were approved by the Holy See, and went into effect on November 15. Church authorities emphasized that the omission of the De Profundis after Mass does not imply that Catholics should pray less for the dead. The intention of the Bishops was to focus the thoughts of Catholics at Mass on its central idea as a sacrifice.

To learn more of the history of this custom I turned to the work of Father Sylvester Malone (1822–1906), a prolific contributor to the Irish Ecclesiastical Record and other nineteenth-century journals. He traced the liturgical use of the De Profundis in one of his books on Irish Church history noting that, as part of the financial arrangements with the Crown in the medieval abbey of Saint Thomas in Dublin, 'the chapter house, over and above what it was bound to, by its order, was under an obligation of saying, especially on All Souls Day, a De Profundis for the souls of the king, his ancestors, the aldermen, and of the citizens of Dublin'. He goes on to say

And here it is worth while to inquire whence the origin of the De Profundis after Mass, and so peculiar to Ireland. Various reasons are assigned for its use;  but I consider it took its rise from a desire to compensate for the loss of the divine offices for departed benefactors. Prayers in the office were not confined to Ireland. Cardinal Bona assures us that when the number of benefactors became large in every well-regulated community, instead of calling out the names of all benefactors the chanting of the De Profundis, with a suitable prayer, had been substituted. There had been an obligation of making a commemoration in the offices for a stated period or for ever. Hence, on their interruption, that most touching of the prayers for the dead was substituted.  Not, indeed, that there had been a strict obligation to do so. Besides the psalm De Profundis touchingly expressed the helpless state in which the Irish Church was placed by penal laws, and continued a protest against the false religion of the so-called Reformers. What wonder, then, that this prayer, warranted by many reasons during the days of persecution, should continue to the present day after Mass, when we find it in use in the early and middle ages even in Ireland. The Irish Church, so tenacious of ancient customs—its chorepiscopi, acolytes, exorcists, readers, its liturgies—what little reason for marvel that it retained its De Profundis called for by charity if not justice.

Another reason why the psalm in question may be looked on as a commutation for the offices is that it is affected by the same causes, and almost in the same way as the offices. The De Profundis is not said, I believe, at least generally after High Mass or solemn Mass for the dead. Well, even when religious orders were bound by vow to say the psalm De Profundis daily, they were inhibited from doing so on All Souls Day, and on the day of the death and burial. And this happened even though there had been a bequest left for the purpose of saying a De Profundis daily. Again, the nuns of the Monastery of Chagas by a decision of July, 1741, were allowed to chant the Responsory for the dead unless on the most solemn festivals, and even on these to recite it privately in choir, lest the pious disposition of testators should be frustrated. Gardelini also informs us (n. 4687) that there had been an immemorial custom in the Church of Milan, of repeating the 129th psalm (De Profundis) with a suitable prayer after the divine offices for the souls in purgatory, especially those of all benefactors. All this leaves no reasonable doubt that the De Profundis was intended in charity or justice as a compensation for the divine offices interrupted by persecution.

Interestingly, in an obituary for his father who died in 1997, contemporary Irish composer Patrick Cassidy recorded that his father had suggested using the De Profundis as a final chorus in a work on the Famine which he was struggling to complete. He went on to say:

My father strongly suspected that the Irish pre-Vatican II practice of the celebrant saying the De Profundis after every Low Mass may have had its origins during the Famine. Further research revealed that the practice was, in fact, more ancient. After he and my mother, Kathleen, contacted Archdeacon Cathal McCarthy, they discovered that "the most likely" and "most popular hypothesis" is that the De Profundis "was meant to be part, or really token, of various endowment Masses which, because of the outlawing of the Mass under the Penal Laws could not be said with any assurance."

It would seem therefore that although the origins of the practice of praying the De Profundis lay in the medieval obligation to honour those benefactors who had endowed religious foundations, it later became linked with the memory of all those who had died during the Penal era, when the Mass itself was placed under restriction and death had to be faced without the comfort of a priest to minister to the dying. In hindsight it is perhaps remarkable that this practice survived in Ireland right up to the middle of the twentieth century.