A Christmas Mass in the Penal Days 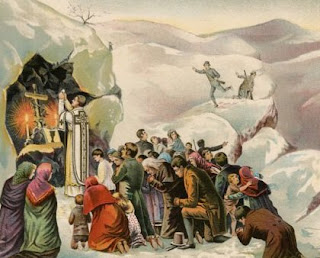 If there is one iconic image which can be said to encapsulate the Irish Catholic experience in the Penal era, then surely it must be that of the people gathering at a Mass Rock while lookouts keep watch for the authorities. The one above is called  'A Christmas Mass in the Penal Days - The Alarm! ' by Dublin cartoonist and illustrator John Dooley Reigh (1851-1914) and was first issued as a supplement to the December 20 issue of the newspaper United Ireland in 1884. [1] This late nineteenth-century lithograph has had a deep and long-lasting influence on the Irish Catholic imagination, and framed copies of it can still be found in Irish homes. In the article below, published almost thirty years later for an Irish-American audience, it is clear that the image has already resonated as a symbol of endurance and unbreakable commitment to their faith on the part of the Irish people.  Indeed, 'Midnight Mass in the Penal Days' became a staple among the articles in the popular religious press at this time of the year. One assumes that a picture of an open-air Mass on a balmy summer evening would not have achieved the same impact as this snow-covered setting.  The anonymous writer of the short piece in The Sacred Heart Review below certainly enters into the scene and almost imagines himself present as 'the bitter winter wind drives the cold sleet before it in stinging gusts' and 'the worshipers shiver in the rush of the pitiless blast'. Yet it is the willingness of the Irish people to endure these hardships in order to attend the Mass which is the reason why the faith survived and which leads the writer to conclude that there is a lesson here for us all:

MASS AND THE FAITH.

When people begin to lose reverence for the Mass, they soon begin to lose their faith altogether. Be faithful to the Mass and the Blessed Sacrament, we repeat, and you will infallibly save your soul. If you are cold and distant and careless toward these essential things you are surely on the broad road that leads to destruction. Why was it that Ireland got the wondrous privilege of preserving the Faith through so many long and blood-stained centuries? asks the Catholic Register and Canadian Extension. It was because of the devotion of her people to the most holy sacrifice. It is a cold heart that does not thrill at the heroic apostolic piety and zeal suggested by the picture of the "Midnight Mass in the Penal Days." Under a protecting bush, in the shelter of a rock, or in a cave in the hillside, are gathered the faithful few. The bitter winter wind drives the cold sleet before it in stinging gusts. The priest is at the rude altar, which is nothing more than a rockhewn shelf. The worshipers, close about him, shiver in the rush of the pitiless blast. On the outer hills and peaks, occupying posts of observation, are the sentinels. They are listening for the tramp of armed men, and watching for the deadly glint of bayonets in the chill white moonlight. For the "priest hunter," with his murderous and blasphemous crew, is abroad, and only the mercy of God can protect his prey. The tinkle of a little bell is heard, and every head is bowed, while on the wings of the night is borne the whispered welcome of Him Who has come down into their midst to comfort them: "Cead mile failte!"— " A hundred thousands welcomes, O Christ, the Son of the Living God!" Never in the history of men did the world witness anything more touching, more devoted, more sublime, than the faith and love of the Irish peasant and his priest for the mystery of the most holy sacrifice of the Mass, that merited for Ireland her perseverance in the true faith; and it is devotion to the Mass and the Blessed Sacrament that will merit the same glorious and priceless gift for ourselves. Let us be wise in good time and take the lesson to heart.