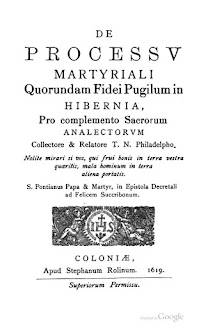 I recently looked at the case of Drogheda merchant James Dowdall who was executed in England in 1599. One of the impediments to the progress of the cause of this brave man was the existence of a namesake and kinsman, James Dowdall of Athboy, County Meath. There was no doubt in the mind of Bishop Rothe, however, that there were two distinct individuals who shared the name of James Dowdall, one from Drogheda and the other from Athboy.  In his 1619 catalogue of Irish martyrs De Processu Martyriali, each was given his own entry but the year of their deaths was unknown. Other evidence has established 1599 as the year of James of Drogheda's execution but whether his Meath kinsman died prior to or after him remains unclear. When nineteenth-century writer Myles O'Reilly compiled his collection he included both men and below is his translation of Rothe's account of James Dowdall of Athboy:

One of the leading men of the municipality of Athboy, was frequently summoned to Dublin by the chancellor to answer for his profession of the Catholic faith, and chiefly because he harboured priests. He was several times thrown into prison, where he patiently spent many years. At length, as the noble-minded man could neither be induced to bend to the times nor abandon his determination of patient endurance, the enemies of the faith let him go for a time, when he returned home, and peaceably died there about the year ___

It is not a surprise to see James described as one of the leading citizens of Athboy as the Dowdall family was a prominent one in Louth and Meath. Of Old English origin, they were known for their piety and for contributing generations of clergy to the Church.  James Dowdall, along with his namesake from Drogheda and Cistercian Father John Baptist Dowdall, is one of three family members who upheld the faith at great personal cost. But the cause of James Dowdall of Athboy does not feature among those submitted to Rome for official consideration as a martyr. I assume that this is because Bishop Rothe's account suggests that although he had suffered imprisonment for lengthy periods, he appears to have died at home. Yet although he was not called upon to end his life on the scaffold like his Drogheda namesake, nor to meet his death in prison like Father John Baptist, the sacrifices made by James Dowdall of Athboy were no less real. He chose to endure repeated periods of imprisonment rather than cease to provide support for priests or to dissemble and compromise to avoid this fate. As a man of substance he would have been giving up a respectable, comfortable life to embrace the hardships of the prison regime and his willingness to do so repeatedly must have been irritating to the authorities.  We do not know the exact circumstances under which he was finally released, but there may be a clue in Bishop Rothe's account of another imprisoned layman, Patrick Browne. Like Dowdall, Browne had also endured long periods of imprisonment which had broken his health. He too was allowed to return home on providing some sort of surety and died thereafter. In the case of Dowdall, Rothe suggests that the authorities realized that they could not break his resolve but presumably the time in prison had consequences for his health too. James Dowdall of Athboy was a man of deep faith and conviction whose patient acceptance of his chosen path and indomitable spirit make him worthy to be remembered. A noble-minded man indeed.

Email ThisBlogThis!Share to TwitterShare to FacebookShare to Pinterest
Labels: Confessors, Irish Martyrs, Lay martyrs, Martyrs in Reign of Elizabeth I