" I desired my cause to be tried in my own country": Blessed Ralph Corby, S.J. 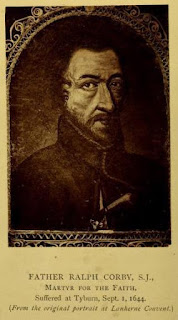 September 7 is the feast of Blessed Ralph Corby, an English Jesuit martyr with a link to Ireland. The Corby family originally hailed from County Durham. There Ralph's grandfather had conformed to the State Church but his father Gerard was convinced by reading Catholic books to turn back to Catholicism. Persecution in England drove Gerard to Ireland where he took service with the Kildare family. Ralph was born at Maynooth in 1598, a circumstance which was to assume a significance later in his life. The family ended up in exile on the Continent and almost unbelievably all of them entered the religious life. Ralph's parents separated when they were in their sixties, Gerard to enter the Jesuits as a lay-brother and his mother Isabella to join the Benedictines in Ghent, following their children into the religious life. Longevity was in the family genes for sources say that Gerard converted his father back to Catholicism at the age of one hundred and that despite her reputation for strictly observing fasts and other austerities, Isabella Corby (Sister Benedicta) also reached the same milestone. Alas, Ralph himself was never to see extreme old age, dying at Tyburn in his mid-forties on September 7 (17th on the old calendar) after being found guilty of returning to England 'having been made a priest and Jesuit beyond the seas'. What is interesting, however, is that it appears that the possibility of a stay of execution was offered by the fact that Father Corby was Irish by birth. Some sources suggest that his supporters actively attempted to procure legal documentation to this effect but it arrived too late. Other martyrologists insist that Corby did not want to pursue this possible escape route as he willingly embraced the prospect of martyrdom, as a good martyr should. Jesuit historian Father Henry Foley tells us:


It was the opinion of some that, with regard to Father Corby, if authentic certificates could be procured of his birth in Ireland, and could be brought forward in time, sentence would be stayed. He heard, then, with great regret, that such letters were being procured, and as far as he might, consistently with obedience, he abstained from promoting that object. Certainly Divine Providence seems to have favoured his ardent aspirations against the attempts made by his friends to save his life; whose success in obtaining this public testimony, God was pleased to render so tardy, that a notary at Ghent made out the certificate of his early birth-place on the same day, and almost at the same hour, that he, being hanged at London, began to be born in heaven. ...


In his own writings, however, it seems clear that Father Corby raised the fact of his Irish birth himself with the authorities during his trial. In the end it was all academic as the statute under which he was condemned was held to be in effect in all of the royal dominions, including Ireland, as Father Foley explains:


Let us hear then, from the facts recorded in the letter of Father Corby, dated September 15, 1664. He says:

''When the sessions were held on Sept. 4 (O.S.), which day is in Catholic countries the 14th, the feast of the Exaltation of the Holy Cross, I was the second called. After I had made my appearance, and the indictment had been read, which was to this effect, 'That Ralph Corby, an Englishman, having been made a priest and Jesuit beyond the seas, had returned into England, contrary to law,' I was asked by the Recorder of the city, the ordinary judge in these cases, 'Guilty or not guilty?' I answered that I was a priest and Jesuit, and acknowledged it; but that I considered this an honour, not a crime. He urged me to answer 'Guilty, or not guilty?' I repeated a second and third time that I was a priest and Jesuit, and that if that was guilt, I confessed myself to be guilty. When no other answer could be got out of me, he asked whether I had anything further to say for myself; but I said, 'That I was not born in England, as was laid in the indictment, but in Ireland, at a time when my parents, for conscience and religion's sake, had fled thither from England; and that I had mentioned this to the commissioners before whom I was brought at my first coming to this city.' 'But this,' said the judge, in a somewhat irritable manner, 'will be no excuse for you. Why, do you not know the statute of Queen Elizabeth?' And he ordered the statute to be read. I do not remember its language; but, according to his interpretation, the wording of the statute extended to all parts of the Dominions of Queen Elizabeth, of which Ireland was a part, 'And so,' he said, ' if you be so courageous, you must die.' Whereupon the jury immediately came forward and pronounced me guilty of the crimes charged in the indictment, and convicted by my own evidence, and I was ordered to be led away.

"The next day I was sent for into court, and when I was placed at the bar, the Recorder again asked what I had to say that sentence of death should not be passed on me according to law. I said that I had pleaded yesterday that, having been born in Ireland, I desired my cause to be tried in my own country, and that this had been denied to me. 'To this,' said he, sufficient answer was given yesterday for the statute comprises both England and Ireland.' And so he passed sentence on me, as follows: ' That I was to return thence to prison, to be taken from prison, placed on a wicker hurdle, and dragged to Tyburn, where I was to be half hanged with a rope, and when half dead, to have my bowels taken out, and my body divided into four parts, which parts were to be taken to Newgate, and exposed in some place appointed by his Majesty.' This sentence having been passed on me, I went gladly back to my prison of Newgate, where I expect that blessed and happy Saturday (he wrote this two days before September 7), which is the vigil of Her glorious nativity by whose holy intercession I hope to be born again to a new and everlasting life; which may the infinite goodness of God grant, by the prayers and merits of the same Mother of God and of His glorious saints. Amen."