"I would not take money and lose my share in this persecution": Patrick Browne 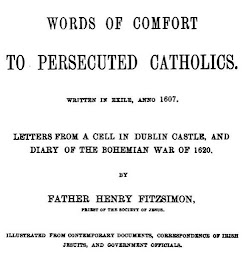 We turn today to the final case of the three Irish martyrs for whom a date of death was not recorded by Bishop Rothe in his De Processu Martyriali. Dubliner Patrick Browne has a good deal in common with the subject of yesterday's post, James Dowdall of Athboy. Both were prominent laymen and members of elite families of the Pale. Their shared commitment to Catholicism led them to prefer long periods of incarceration rather than compromise. Both were eventually released in order to die at home. One point of difference though is that while Dowdall was a devout Catholic all his life, according to Bishop Rothe Browne had been raised in the new state religion:

A distinguished citizen of Dublin, had been reared up from his youth in heresy, but by a special grace of God was received into the church; and for the profession of the faith he suffered in Dublin, for nearly twenty years, a most cruel imprisonment, which he bore with unshaken mind, but from which he contracted a fatal disease; and although he was at length, on giving security, allowed home for a time to recover from his disease, he was only delivered from it by a happy death.

Bishop Rothe, however, is not the only early seventeenth-century source to mention Patrick Browne and his willingness to accept the consequences of his recusancy. Jesuit priest Christopher Holywood kept a record of events in Ireland during the year 1606 and noted that at the end of January Patrick Browne was one of three prominent Dublin citizens who faced fines and imprisonment:

January 29, 1606, Philip Conran of Dublin, alderman, condemned in the Star Chamber to pay 200 marks sterling; and Patrick Browne, alderman, and J. Golding, merchant, to £100 le peece, and to be imprisoned.

The same source also recorded a rejoinder from our alderman when it was suggested he could buy his way out of trouble:

Alderman Patrick Browne had often sanctified the prison-cell for the sake of religion, and he was asked to purchase by money immunity from the coming persecution. He answered in a manner worthy of Proxenetes, "I would not take money and lose my share in this persecution".

Rev. Henry Fitzsimon S. J. ,  ed. Edmund Hogan, S. J. Words of Comfort to Persecuted Catholics (Dublin, 1881), pp. 129; 157.
It must be said that Browne stood to lose a great deal for the sake of his conscience. He was not just a civic figure of note but also a landholder and merchant, involved in the profitable trade between the port of Dublin and Chester. He was willing to risk all of this as well as his health and liberty for the sake of upholding his faith. Is this a demonstration of convert zeal?  I would be interested to find out if Patrick Browne was indeed raised as a Protestant or whether his father was one of those who had outwardly conformed but continued with Catholic practice in private. This was possible in the earlier part of Queen Elizabeth's reign but later the authorities in the Irish capital began to more rigorously enforce the requirements to attend the state church and to take action against those who refused. The entry for Patrick Browne in the online Dictionary of Irish Biography which can be viewed here references his strong Catholicism, mentioning for example that his Dublin home was often used as a mass house, but does not say that he was a convert. The Dictionary also supplies the date of 1614 for his death. There is no date of birth recorded but as Browne was first elected as an Alderman of the city of Dublin in 1579, it would seem that he was at least in middle age by the time of his death. One can only salute his courage in being prepared to sacrifice his wealth and social standing for the sake of his conscience and for exchanging his comfortable home for a prison cell.
Patrick Browne is number 97 on the Official List of Irish Martyrs whose names were submitted to Rome for consideration of their causes.

Email ThisBlogThis!Share to TwitterShare to FacebookShare to Pinterest
Labels: Confessors, Irish Martyrs, Lay martyrs, Martyrs in Reign of James I, Martyrs of Dublin