Mass in the Penal Days 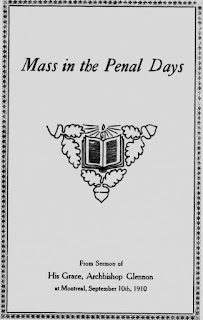 We turn away today from accounts in the popular religious press on the theme of Christmas Mass in Penal Era Ireland to a sermon given by Archbishop John Joseph Glennon (1862–1946), a native of County Westmeath who served as Archbishop of St. Louis from 1903 until his death in 1946. Below is an extract from a 1910 sermon he delivered in Saint Patrick's Church in Montreal during the Eucharistic Congress. Although the Archbishop is not directly addressing the specifically seasonal aspects of Mass at the Penal Rock, nevertheless he alludes to many of the features we associate with it, from the 'sad-visaged' priest to the necessity for lookouts and the potentially dire consequences of discovery. Indeed, it is because both celebrant and congregation are so intently focused on the most solemn part of the liturgy that the authorities are able to close in. I note too that like other commentators Archbishop Glennon favourably compares the natural outdoor setting of Mass in the Penal Days with anything a gilded cathedral had to offer:

Mass in the Penal Days
From Sermon of His Grace, Archbishop Glennon at Montreal.
September 10th, 1910

Extract from Sermon delivered by His Grace, Archbishop Glennon, of St. Louis, in St. Patrick's Church, Montreal, on September 10th, 1910, during the Eucharistic Congress

"IT is not inopportune that in this Eucharistic Congress, this litany of nations in the praise of their King, that I should speak a word, that I should strike a chord, though it be in a minor key,  for the nation whose apostle is patron of this sacred edifice, and whose exiled sons have made possible its building. I would pass by the days of the schoolmen, and come to those latter days, namely the penal times in Ireland, the long weary years when the Catholic Church was persecuted, when a price was set on every 'Mass priest', when the churches were alienated, desecrated, burned; and the entire country pillaged and its people driven to the mountains or into the sea. And this dread visitation, unlike the storm that passes, unlike the plague that eats its lethal way, not for a season, but for over three hundred years, brooded over the land, its darkness lighted only by the ascending fires of burning homes, or the gleaming swords of the brutal soldiers. It is easy to serve in fair weather: the test of devotion comes when human life is the forfeit. The Irish people stood the test, their land to-day is hallowed by the ashes of a hundred thousand martyrs of the Blessed Sacrament, while the survivors, praying their 'De profundis' for the dead, cling still to the 'Mass priest', and their fealty tried by fire is all the truer to their King.

It was during the burning days that the 'Mass priest', sad-visaged and hunted, gathered his flock out in the mountain fastness, or in the shaded valleys. Knowing that the enemy was near, outposts were set so as to guard the approach, and give the signal of threatening danger. The candles were lighted, the priest puts on the sacred vestments. It is not a scene to attract the eye of the worldling; there are no marble columns, no tabernacle of gold, no fretted roof, no dim visted aisle, no organ pealing, no glorious chant, no censer swinging. But for people such as these around, love crowns all, love transforms all. For them the censor swings, for, is there not the perfume of the wild flowers that bloom there, of purple heath, of fragment hawthorn; vistas, there are, too, just as nature made them in rich nature's temple, for down the valley are the dim aisles of the forest trees. And for a sacrificial chant, they have the song of birds, and the murmur of their own heart's love, the love of Irish hearts for their faith and their Lord; of all others on this earth that we know of, the tenderest, the truest, the best.

Yet little time have they now to think of those things. The Mass is commenced. The priest has invoked the mercy of God— 'Lord have mercy on us'; he prays for the living and the dead. He reaches the solemn act that brings the Saviour down to His poor people. With bowed heads and reverent, the people murmur words of welcome, satisfied that, though by all the world forgotten, yet will He not forget them.

But why the alarm? Alas, these moments absorbed in worship are taken advantage of; the enemy, the soldiers of the King, are around them. The cry, repeated in the long ago, is heard again, We have no king but Caesar.' 'Down with the Mass'— 'Death to the Mass priest'— it is the tragedy of Calvary again, only to the tragedy is added the desecration. The blood of the Saviour and his priest flow together, and the dying lips of the priest whisper their last words on earth, 'Go, the sacrifice is over.' Quite true it is that the penal days in Ireland have ended long ago, and if the memory of them remain, it is not in bitterness nor revenge. No, they are thinking now, not of their persecutors, but how best they may honor and serve in the days of their religious freedom the King they followed during the long night of their persecution. Now they will restore him to the churches they build, churches to take the place of their older temples, from which He has been driven, and they have been despoiled. They will cross the seas bearing the standard of their King."