The Midnight Mass: A Christmas Incident of the Penal Days in Ireland 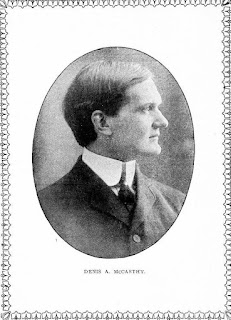 Yesterday we looked at the nineteenth-century lithograph 'A Christmas Mass in the Penal Days - The Alarm! containing all of the iconic elements of the people huddled together in the snow while the lookouts rush to warn the priest to flee from the approaching soldiers. Over the next few days we will look at some further examples of how this symbol of the Penal era appeared in the popular religious press, especially that aimed at Irish expatriate communities. We begin with a piece by the Irish-American poet Denis Aloysius McCarthy (1871-1931), who was based in Boston and a regular contributor to its Sacred Heart Review.  The Irish saints and martyrs were a favourite subject of McCarthy's poems, selections from which were often quoted by other writers in an age which enjoyed epic poetry.  In the article below, published in the December 25, 1897, edition of the Sacred Heart Review,  the writer begins with a poem telling of a hunted priest battling the winter wind and trying to evade the authorities to reach his lonely altar beneath the hill. Alas, in this case the warning to flee comes too late and the unfortunate soggarth will say the Midnight Mass no more. It is interesting to see that the poet suggests that despite the makeshift outdoor setting, the quality of the worship at the Mass Rock surpasses anything found at a cathedral. He then goes on to offer a sentimental reflection on what it is to be away from the old country at this time of the year. He seems keen to point out though that such nostalgia is not a denial of all the benefits which America has to offer and stresses the loyalty of the Irish to its banner of liberty. Indeed, McCarthy dedicated his 1906 anthology Voices from Erin 'To all who in their love for the new land have not forgotten the old':

A CHRISTMAS INCIDENT OF THE PENAL DAYS IN IRELAND.

With stealthy step across the wold
The hunted soggarth swiftly goes;
The winter wind is blowing cold
And round him drives the winter snows;
But little does he heed the wind,
The blinding snow, the dark morass;
With many an anxious glance behind
He goes to say the midnight Mass!
For hours, with many a devious turn.
He's led the chase by moor and fen.
He's seen the village tapers burn,
But dare not seek the haunts of men,
For close upon his track have pressed,
(His holy Faith the only cause)
With horrid oath and ruffian jest,
The minions of the Penal Laws.
And woe to him, should evil hap
Into their hands the priest betray;
The raven o'er his corse should flap
Her sable wings before the day!
But fainter now have grown their cries,
Their shots more distant than before,
And hopes within his heart arise
That he has baffled them once more!
Ah, vain the hope of baffled foes! —
A few more crafty than the rest
Still dog his steps as on he goes,
Still keep the chase with eager zest;
But, all unconscious, fares he still
By tangled wood and torrent dread
To where, beneath a lonely hill,
The Mass in secret may be said.
"Oh, failte! failtel" —round him throng
The remnant of his scattered flock,
And Mass with neither chant nor song
Is offered from a fallen rock;
And never at cathedral shrine
Were purer spirits wrapt in prayer
Than those who worshiped the Divine
Before that lonely altar there.
But, hark! The rite is scarcely done
When rings a cry upon the breeze;
"Up, Father — for your life — and run!"
The soggarth rises from his knees—
Too late! One muttered prayer to God, —
A volley shakes the mountain-pass,—
The priest lies dead upon the sod
He'll say no more the midnight Mass!

At Christmas time all hearts turn homeward. The present is forgotten, the future ceases to allure, and the past is before us again in all its brightest lights and tenderest shadows. We forget the long, dreary years of separation, the vicissitudes of time, the strange scenes and faces with which we have become familiar during many a day of exile; and, once more, the old home, the family circle, unbroken yet by absence, the loving faces of parents and of brothers and sisters, are presented to our gaze; and few indeed are the hearts that do not beat faster, and few are the eyes that are not dimmed with tears at the memory of old times.

To the Irish exile, particularly, this season of Christmas is one of remembrances that are composed of mingled joy and sorrow. For Christmas in Ireland, as in no other country, is a day sacred to family life and love. It would seem, indeed, as if upon that land, ever faithful to the Church through ages of persecution,the Holy Family had showered the richest spiritual blessings, for the affection that obtains in pious Irish households among the various members of the family is akin to that love which bound together the three principal actors in the great mysterious drama at Bethlehem. It is therefore only natural that the thoughts of the Irish exile turn back to the old scenes that he may never again see in reality, and to the old friends whose hands he may clasp again only In dreams and "tears of memory," shed at Christmas time over the past are evidence of the deep and holy feeling for home which God has implanted in the hearts of the Irish people.

The new country, with all its broadening influences, with its atmosphere of freedom, and the possibilities of material advancement that it affords, is very dear to the sons of the Green Isle who have sought and found shelter from oppression and bitter poverty beneath its starry flag. They have increased and multiplied. Their blood courses in the veins of the best and bravest of the citizens of the great republic. In peace they have tilled the fertile lands, and reared upon the boundless prairies the homes that were denied them in the land of their birth; and in war they have been the to grapple with the foes of their adopted country, shedding their blood freely in defense of a banner that is to them the symbol of liberty for themselves, and hope for the old land over the water.

But the hearts go backward across the leagues of the Atlantic and the years of absence, to their motherland at Christmas. They hear Mass again in the little chapel. They see the gray-haired priest at the altar. They listen to the Christmas hymn of the humble village choir, than which the grandest cathedral chorus is, to them, not more solemn and inspiring. And around them are the friends of their youth, unchanged.

Of course it is only a dream. But who can say that this return to old times does not make the hearts of the exiles better and braver, bringing them, through home ties, more close to the Babe of Bethlehem, in Whose cause their fathers bore persecution unflinchingly, and strengthening them against the enemies of their race and creed, who would rob them of their love for faith and fatherland.

Email ThisBlogThis!Share to TwitterShare to FacebookShare to Pinterest
Labels: Mass in Penal Times