The Most Important Christmas Custom 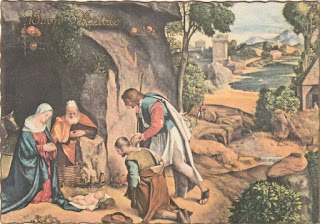 We conclude the series on how Mass in the Penal Era in Ireland was presented to an Irish-American audience at Christmas time with a final offering from the Boston-based newspaper The Sacred Heart Review. In 'The Most Important Christmas Custom' the writer examines why the Christmas Midnight Mass was of such importance to the people of Ireland and suggests that it was because people were forced to gather before dawn during the penal era. He then goes on to draw a parallel between Our Lady and Saint Joseph being forced to retire to 'a cavern in the rock' when there was no room at the inn and the Irish people being forced by the penal laws to retire to underground caverns to celebrate the Mass. Thus once again we see it suggested that despite the harsh physical conditions in which the Christmas Mass was celebrated in Ireland at this time, the spiritual quality of the worship was something special:

THE MOST IMPORTANT CHRISTMAS CUSTOM.

"Of the Christmas customs of Catholic Ireland in its glory," wrote O. B. M. in the Catholic Columbian, a few years ago, "we have not even the records nor the traditions. All was destroyed. We have but the English records of laws that proscribed them, that intended to destroy the faith itself, and whose authors vainly thought they had succeeded.

"But the faith survived in Ireland and Christmas in its essence survived with it. The laws of the persecutor aimed at the destruction of all things Catholic; but it singled out for special proscription the Holy Sacrifice of the Mass. The Catholic religion was for the time banished, outlawed. The celebration of the Mass was especially penalised. For 276 years the Mass was proscribed and yet the Mass never ceased to be offered. The people retired to the hillsides, to the glens, and to underground caverns and there often before the dawn assembled around the altar whereon the Holy Sacrifice of the Mass was offered.

"In those years the Christmas Midnight Mass was, therefore, the great central observance; and it remains so to-day in Ireland as it does not in any other country. Some readers may remember the picture which Carleton in his 'Willy Reilly' draws of a Mass in the penal days celebrated in an underground cavern. How could a Christmas come nearer to the literal repetition of Bethlehem than a Midnight Mass in Ireland under such conditions? The central fact of Christmas is the presence of God the Saviour in the flesh. Here the people had Him present upon the altar. It was to a cavern in the rock that the Blessed Mother and Joseph retired, 'because there was no room for them in the Inn.' Here the Catholic people retired because they were hunted from the towns and even from the face of the earth but they had the Saviour present with them all, visible to the eyes of faith. The shepherds did not see the Godhead but believed the word that was given them from heaven and adored Him present on the Altar.

"It is not strange, therefore, that in Ireland the early Mass on Christmas day is the great central fact of the celebration. Three hundred years during which it was their only consolation have trained the people to this. In the country districts it is now celebrated not at midnight but in the very early morning. But to the young, especially in this northern latitude, five o'clock on Dec. 25 is equivalent to midnight."

Email ThisBlogThis!Share to TwitterShare to FacebookShare to Pinterest
Labels: Mass in Penal Times