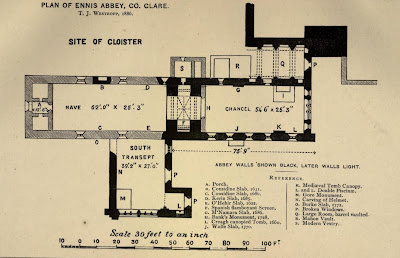 On August 9 1617 the last member of the Franciscan community of Ennis, County Clare died. He had lived there alone for the past few years with just a servant for company, as the rest of the Brothers had been driven out in 1575. Yet perhaps this strange end to the life of Father Dermot Mac Bruodin is fitting for a man who cultivated an image as a 'fool for Christ.' Mac Bruodin belonged to an important family of Thomond and it was his family's connection to the O'Briens, lords of Thomond, that made it possible for Dermot to continue living on in his former friary after it had been suppressed and handed over to the new State Church. For Donat O'Brien, Earl of Thomond, had outwardly conformed to the new regime but did not forget old loyalties. He encouraged Mac Bruodin to play the part of the holy fool while also making it clear that the eccentric friar enjoyed his protection. Family ties also played a part in the survival of the story of Dermot Mac Bruodin for he was a kinsman of the martyrologist Anthony Bruodin O.F.M. (1625-1680) who featured him in his work on Irish martyrs, Propugnaculum Catholicæ Veritatis. Bruodin's account was one of those translated by Myles O'Reilly in 1868 and I reproduce it below. A more modern translation has been made by Luke McInerney and apppended to his 2017 paper A 'most vainglorious man': the writings of Antonius Bruodin which can be read online here. Although Bruodin's account makes it clear that Friar Dermot had suffered torture and imprisonment for the sake of his faith, he did not actually die in prison and is thus not included officially among the Irish martyrs. His bravery in returning to his homeland to preach the Catholic faith, his withstanding of the hardships of a life on the run as well as of torture and imprisonment and the pathos of him occupying his former monastic site alone make him indeed worthy to be remembered.

‘‘Dermid Bruodin was born in Thomond, in Ireland, of a family noted for many generations for piety, learning, and hospitality, and became a member of the Franciscan Order. His father was Miles Bruodin, owner of Mount Calary, a man much esteemed by Cornelius O’Brien, Earl of Thomond (Clare); his mother was Joanna Mahony, or Matthews. He was no longer a boy when, having learned the rudiments of learning, he lost his parents, and, having always intended to devote himself to God, entered the cloister amongst the strict observers of evangelical poverty—the Franciscans—as a novice in the convent of Inisheen, in Clare. He was a model of virtue, assiduous in prayer, ready for every exercise of humility, constant in fasting, and daily afflicting his body with the discipline.

"Having made his profession, by order of his superiors he proceeded to Spain, and there, among the sons of the province of S. James, progressed alike in learning and piety. When his studies were completed, he was advanced to the priesthood, and desired at once to devote himself to the saving of souls in his country, afflicted by heresy. His superiors agreed to his request, and Dermid, trusting in the Cross of Christ, embarked in his Franciscan habit (for neither danger nor the entreaties of his friends could ever induce him, as the other missionaries, to exchange his habit for a secular dress*), and, by the providence of God, he landed at a port near the place of his birth, near the island of S. Sinnanus, called Inniscatha, in the middle of the river Shannon, in the year 1575.

[*It is to be remembered that he dwelt in Clare, a remote district, inhabited exclusively by Catholics, and whither the Queen’s soldiers rarely penetrated.]

“The moment Bruodin touched his native soil he gave thanks to God, and began his apostolic labours amongst his friends and relatives (and then, as now, there were as many Catholics as Bruodins), and laboured with such zeal, where before they had been suffering from a dearth of pastors, that the Catholics in all the baronies of Clare were provided with spiritual food. Dermid had thus laboured for many years in the vineyard of the Lord, when the enemy of human salvation sought, by means of the satellites of Elizabeth, to put a stop to his zealous efforts. Divers man-hunters were therefore employed throughout Clare to catch in their nets the zealous preacher, whose zeal, indeed, for martyrdom would long before have brought him into their hands had he not been prevented by his superiors.

"Whilst the search was most eager Dermid was employed preaching and catechizing not far from Limerick, in a place, however, which was mountainous, and generally safe from the excursions of the heretics. However, his presence there came to the knowledge of the commander of the garrison in Limerick, who sent some musketeers to arrest him, and they seized him in the act of preaching from the top of a mound. He received many blows from the fists and sticks of the soldiers, and, with his hands tied behind him, was driven to Limerick, in the year 1603. Bruodin, who had been weakened by his voluntary fasts, was thrown into prison, where for four months he endured much, for it was forbidden under a heavy penalty for any Catholic to speak to him or give him any assistance.

“At the end of this time he was brought before the king's judges, and being asked many idle questions, Dermid boldly answered that his dress showed he was a Catholic and a Franciscan; that as to his name, profession, labours, and friends, they were abundantly known to those who had taken him when preaching; that therefore there was nothing to be done but either to set him free, or by torture to try his constancy in the profession of the Catholic faith. 'Well,' said the judge, 'you shall have your wish.'  By his order the Franciscan habit was torn off him, and he was severely flogged by two executioners; then his hands were tied behind him, and he was lifted up by them off the ground. Whilst he was thus tortured he was asked by a certain petulant preacher whether he felt pain? He answered, 'I feel pain indeed, but far less than my Lord and Saviour Jesus Christ, for whose cause I suffer, endured for me.' Then, let down from the rack, he was taken back to prison.

"At the time when Father Bruodin was being tortured there arrived in Limerick Donatus O'Brien, the powerful chieftain of his own race, and Earl of Thomond. He was a man of great influence both in England and Ireland. Touched by the affection which the O'Briens always bore to the Bruodins, he sought to devise some way of freeing Father Dermid from further tortures and the death which threatened him. With this view, the earl persuaded the judges that Dermid was a fool, with whom he often amused himself, and, to prove this, he adduced as an argument that no one but a fool would go about in public with his head shaved, and a long beard and a long habit, contrary to the usual practice of all the other Popish priests in England and Ireland.

The judges, either persuaded, or, as I think, not wishing to offend the powerful earl (whose fidelity and services to the Crown were well known), set Dermid at liberty, who was indeed nearly worn out with tortures and suffering. Dermid, thus set free as a fool for Christ, returned to his native district and prudently resumed his labours in Clare. Protected everywhere by being known as the mad monk, and favoured by Earl O’Brien (a man nominally a heretic, but a Catholic in his heart), he passed safely through the persecuting English at Inish** and elsewhere in the province, and gained many to Christ, ever wearing the Franciscan habit, and often rejoicing to bear insults and derision for the honour of Christ. At length, weighed down with years, and worn out with labours, Bruodin, fortified with the sacraments of the Church, slept in the Lord, in his Franciscan convent of Inish, the 9th August, 1617. The other friars had been expelled in 1575, and he had lived there alone with his servant for the three last years of his life .—Bruodin, lib. iii. cap. 20.

[** The Franciscan convent of Inish, or Inis-Cluan-ruada, founded, according to Ware, by Donagh Carbrac O’Brian in the year 1210, for Minorites, by the river Forgy.]

Email ThisBlogThis!Share to TwitterShare to FacebookShare to Pinterest
Labels: Franciscan Martyrs, Irish Martyrs, Martyrs in Reign of James I, Suppression of the Monasteries