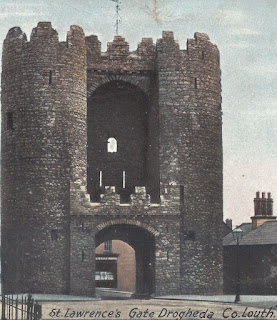 On August 13, 1599, James Dowdall, an Irish merchant from Drogheda was hanged, drawn and quartered at Exeter having been found guilty of denying the Royal Supremacy. His ship had ended up on the Devon coast due to bad weather on a return voyage to Ireland from France. The Dowdalls were a prominent merchant family who had contributed much not only to Irish civil and commercial life but also to the Church. The family pedigree embraced senior churchmen like Archbishop George Dowdall, and Saint Oliver Plunkett was a cousin. No less than three members of the family are among those who suffered for the faith, ironically though it was these very family connections which stopped the cause of James Dowdall from proceeding. For although his name was put forward with those of the English martyrs declared venerable in 1886, his cause was one of those held back for further investigation. The reason seems to have been a degree of confusion between James Dowdall of Drogheda and his namesake and kinsman James Dowdall of Athboy, County Meath. James Dowdall of Athboy also suffered for the Catholic faith by enduring long periods of imprisonment for sheltering priests. There is also some degree of confusion around the date of James Dowdall of Drogheda's execution with some sources citing September 20, 1600 plus Waterford or Wexford is occasionally claimed as his place of origin. It was to resolve these difficulties and to plead the case for reopening the cause of James Dowdall that Margaret Smith Kristich contributed two meticulously-researched articles to Seanchas Ardmhaca, the Journal of the Armagh Diocesan Historical Society, in 2004 and 2012. Her work has has convincingly demonstrated that James Dowdall of Drogheda is a distinct individual from James Dowdall of Athboy and she has assembled a comprehensive dossier of evidence on the circumstances surrounding his martyrdom.

Dowdall's case was known to early seventeenth-century martyrologists, including his contemporary Bishop David Rothe (1573-1650). Rothe's account in his 1619 catalogue of Irish Martyrs, De Processu Martyriali, is of great value as it was written not long after the events it describes and because of the sources of information which Rothe as a senior cleric was able to access. In her 2004 paper Smith Kristich provided a translation of Rothe's account:


James Doudall a merchant of Vadipont (Drogheda), while he had crossed over to England to carry out some business, was examined first on the royal oath, and entrapped with snares of examination by torture, and because he was not afraid to profess his mind and Catholic faith openly, he was put to death, in the city of Exeter and it is said that his monument shines with stars to this very day. [1]

Another contemporary source, this time from a 1614 catalogue of martyrs by the English priest Father Worthington (1549-1627), unfortunately got both Dowdall's Christian name and place of origin wrong, although he gives August 13 as the date of execution and confirms Exeter as the place:


1599 - N. Dowdale Irish Merchant of Waterford was killed for denying the primacy of the queen in ecclesiastical affairs. Exeter 13, August. [2]

Later writers also recorded the Dowdall martyrdom story including Father Denis Murphy in his 1896 work, Our Martyrs, where he led with Anthony Bruodin's account published in 1669:

He was a Drogheda merchant, and when returning from France to Ireland he was driven by contrary winds into a harbour in the south of England. The Mayor questioned him about the spiritual supremacy of Elizabeth. Dowdall answered, as a Catholic should, that he recognized no other as Head of the Church than the Roman Pontiff. Because he had spoken thus, his merchandise was confiscated, and he was taken to Exeter, his hands bound beyond his back as if he were a robber. There after being put to the rack, he was hanged and his body was cut into four parts; and in this way, in return for temporal goods, this very wise merchant got in exchange eternal life. He suffered September 20th, 1600. [3]

We can see that the Bruodin account is more detailed than those written earlier, but it confirms the main points. All the writers agree that Dowdall was executed in Exeter for denying the Royal Supremacy. Where they disagree is that the English sources have introduced uncertainty about the Irish martyr's name and his place of origin. Waterford and Wexford were also important trading ports and their merchant ships familiar visitors to England. It could well be that on hearing of an Irish merchant martyred at Exeter there was an assumption made that he must have come from one of these places. Irish writers Rothe and Bruodin, who are perhaps better-placed to know, agree that the man is James Dowdall and that his home port was Drogheda. Bruodin however has added some confusion by giving September 20 1600 as the execution date. To settle the matter Margaret Smith Kristich consulted the Devon Assize Court Records and found that the last reference to James Dowdall in the gaol calendar was from the last day of July 1599 when it recorded the sentence of hanging for treason. Since executions usually followed soon after sentencing, August 13 1599 is most probably the correct date. From the description of the county jail as 'a living tomb - a sink of filth, pestilence and profligacy' [4], the less time James Dowdall had to spend there the better, especially as he was put to the torture of the rack. Rothe's account suggests that the site of Dowdall's grave was known which in turn suggests that despite his traitor's death he may have perhaps received a conventional burial.

It is greatly to be regretted that this brave Irishman has had his cause delayed due to the confusing details in some of the accounts of his martyrdom. I will leave the last word to Margaret Smith Kristich who has done so much to set the record straight:

One can imagine that courage and forgiveness wrapped him warmly in the damp, cold, and filthy dungeon of  Exeter Prison. The vibrancy and sparkle of James Dowdall's life is retold in the many works about the Irish martyrs. It is said that his grave was illuminated with miracles. May the illumination of his life bless our turbulent world and bring us close to God.

Email ThisBlogThis!Share to TwitterShare to FacebookShare to Pinterest
Labels: Irishmen Martyred in England, Lay martyrs, Martyrs in Reign of Elizabeth I