A couple of days ago I looked at the martyrdom of an Irishman in England, the Drogheda merchant James Dowdall. Today we are looking at the case of a young English Carmelite martyred in Drogheda,  Brother Angelus of Saint Joseph. Born George Halley in Hereford, c. 1620 he was executed on August 15, 1642, a victim of the rebellion which had begun the previous year. The rebels under Phelim O'Neill had unsuccessfully besieged the town of Drogheda twice but were defeated in March 1642 by an English relief force under Lord Moore. Caught up in the aftermath was Englishman George Halley who had come to Ireland to enter the novitiate of the Discalced Carmelites. Initially I wondered why he did not enter the religious life in his own homeland but then found this note which provided the answer:


The presence of English Carmelites in Ireland is explained by a decision of the Carmelite general definitory, 20 Nov. 1636, allowing the Irish brethren to train two English novices annually in the Dublin friary. [1]

Alas, our young Englishman was not destined to see his own country again. The following account of the martyrdom of Brother Angelus has been taken from Carmel in Ireland by Father J. P. Rushe, O.D.C. Rushe was appointed the official historian of the Order in 1908, and was a witness in the cause of the Irish Martyrs as this Brother is one of three Carmelite martyrs whose causes were submitted to Rome. The account relies on the testimony of a priest, Father Nugent, who visited Brother Angelus in prison and also on that of a group of nuns. They add the detail that the martyr was not only shot but ultimately beheaded. This grisly detail explains why the early eighteenth-century portrait preserved in the Carmelite monastery at Piacenza depicts Brother Angelus with a sword embedded in his skull: 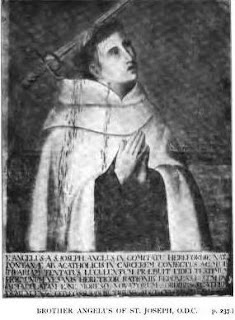 The Teresian student slain by the Puritans was known in the world as George Halley. He was an Englishman, the member of a Catholic family of Herefordshire. An Irish Discalced Carmelite had been the first entrusted with his education, and when at a very early age the youth found himself called to embrace the Religious life, he himself ambitioned to become a Friar of the same Order. He received the brown habit at Dublin in the year 1640, taking the name of Angelus of St. Joseph, which, we are told, was admirably significative of his gentle disposition. He hoped to be allowed to return to England after his ordination to labour there for the conversion of his countrymen. God willed otherwise, and now Ireland numbers him among her Confessors, as it was here he shed his blood for the faith.

Fra Angelus was professed in due course, having given great edification to his brethren during his noviceship. He had begun by resolving to remain ever indifferent to such things as could win for him human esteem; we shall see how his conduct was influenced by the same good purpose to the end. Hardly had he arrived in Drogheda to begin his studies when all the Friars had to leave that city owing to the fury of the Puritans. Brother Angelus escaped in the beginning, but he was subsequently arrested and taken back to the town. During his imprisonment he suffered great annoyance from the heretical ministers who tried to harass him by objections against the faith. On hearing them allude to the "Pure Gospel" of their sect, he quietly remarked that he knew the Law of the Lord must indeed be undefiled, and for this very reason he abhorred the errors of all fanatics.

His spirit could not be broken by the crudest privations; he was always wishing for yet greater trials. And keeping himself recollected by the practice of mental prayer throughout his long captivity, he was able, from time to time, to give prudent advice to the Faithful imprisoned with him for the Catholic cause. Contrary to all expectation, he was one day released on condition that he should leave Drogheda forthwith. This was an unaccountable act of leniency on the part of the Puritans. They must have had some political motive in view; perhaps it was their fear of Owen Roe O'Neill, who had succeeded Sir Phelim as leader of the Confederate army, and who was determined to besiege the city.

There was a certain Father Nugent, a Capuchin Friar, who knew Brother Angelus intimately, having often contrived to visit him in prison. This priest informs us that it was the intention of the young Religious on his release to join his brethren who were still leading "The Regular Life" in a place not very far distant (probably Ardee), which was still protected by an Irish regiment. On his way thither Brother Angelus met a little band of nuns proceeding in the same direction, and having a "Safe-conduct" from the Puritans: an extraordinary favour, surely, considering how women devoted to God were hated by the heretics of the seventeenth century. One night they found refuge in a fort held by the Confederates; but before morning it was taken by the enemy—the fanatical soldiers of Lord Moore.

Brother Angelus appears to have had a presentiment of his approaching doom. He was told that there was a priest in the fort; and that the Holy Sacrifice could be offered secretly without any great risk. Availing themselves of the opportunity, the Religious— Fra Angelus and his companions—made arrangements to assist at Mass the next morning, and to receive the Blessed Eucharist. Wonderfully strengthened by this great consolation, the young Friar proposed that the nuns should present their "Safe-conduct" to Lord Moore. Naturally they were terrified at the thought of meeting a Puritan general; but there was no other means of escape, and they were reassured when Brother Angelus said he was coming with them himself; for they imagined that he also would be allowed to leave the place in virtue of their passport.

Lord Moore received the nuns with much courtesy, telling them they were free to depart whenever they pleased. But he instantly recognised their companion as the monk who had been so leniently dealt with at Drogheda. A court-martial was summoned to decide his fate, and of course he was condemned to death. If Brother Angelus would avert this dread sentence, and even ensure the general's patronage and friendship, he had only to deny his faith. This he could not do; and it enraged the Puritans to hear him request, quite calmly, that his execution should not be delayed, as he longed to celebrate the grand privilege of the Blessed Virgin by dying for the Catholic faith. It was the Feast of Our Lady's Assumption.

A file of soldiers were ordered to take him apart, and shoot him. He knelt when they presented their firearms at his breast; but in this instance, likewise, Heaven intervened, several volleys having been fired in vain. However, the Puritans were determined to silence the voice that still invoked the holy name of Mary; like the Pagan tyrants, in the early ages of Christianity, seeing the failure of the executioners the general commanded them to have recourse to the sword. Brother Angelus was beheaded on the 15th August 1642. Lord Moore himself was shot dead soon after, having previously suffered the disgrace of an ignominious defeat.

The nuns, who had been the witnesses of the martyr's victory, communicated all the circumstances to his brethren later on. At first his body was interred by the Faithful of the district in a secret place, and in more peaceful times they removed it thence to a church with every mark of pious veneration for the slain Friar's memory. Brother Angelus's virtues were well known to them; although very young "he had been made perfect in a short space, thereby fulfilling a long time: because his soul pleased God." [2]

Email ThisBlogThis!Share to TwitterShare to FacebookShare to Pinterest
Labels: Carmelite Martyrs, Irish Martyrs, Martyrs in reign of Charles I