During the month of August we commemorate three Irishmen who were martyred in Britain. One was the Franciscan priest, Charles Mahony (also known as Meehan) who was executed in Ruthin in north Wales on August 12, 1679. The story of Father Charles was picked up by the Australian press following the beatification of a number of English martyrs in 1929. He himself was not beatified on this occasion and had to wait until 1987. I have a number of more recent sources on the case of Father Charles to investigate so look forward to writing a fuller account of him in the future. For now we have the main details of his martyrdom as well as a brief account of the cases of some other Irish names found among the English Martyrs: 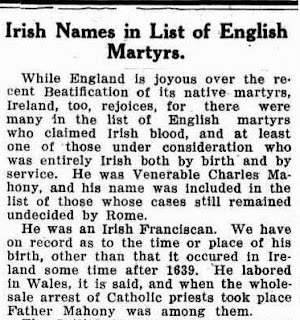 While England is joyous over the recent Beatification of its native martyrs, Ireland, too, rejoices, for , there were many in the list of English martyrs who claimed Irish blood, and at least one of those under consideration who was entirely Irish both by birth and by service. He was Venerable Charles Mahony, and his name was included in the list of those whose cases still remained undecided by Rome.

He was an Irish Franciscan. We have on record as to the time or place, of his birth, other than that it occured in Ireland some time after 1639. He labored in Wales, it is said, and when the wholesale arrest of Catholic priests took place Father Mahony was among them. The British Museum now possesses a manuscript entitled 'The Last Speeches of Three Priests that were Executed for Religion, Anno Domini 1679.' The paper contains the following defence made by Father Mahony:

"Now God Almighty is pleased I should suffer Martyrdom; His Holy Name is praised, since I die for my Religion. But you have no right to put me to death in this country, though I confessed myself to be a Priest, for you seized me as I was going to my native country, Ireland, being driven at sea on this coast.

"For I never used my function in England before I was taken. However, God forgive you, as I do and I shall, always pray for you especially for those that were so good to me in my distress, I pray God bless our King and defend him from his enemies and convert him to the Holy Catholic Faith, Amen."

The official document of Father Mahony's execution stated that he was under forty years of age and that he was tried and condemned at Denbigh, "confessing himself to be a priest." His execution took place at Ruthin in North Wales on August 12, 1679.

There were others of Irish blood among the martyrs or those under consideration. One who was among the recently beatified was Blessed Father John Cornelius, whose name was also Mahony or O'Mahony. With him there suffered two other men, both from Dublin, known as John Carey and Patrick Salmon. This trio of Irishmen went to their deaths in the company of a courageous man from Cornwall, that picturesque section of England. The Cornishman was Blessed Thomas Bosgrave. He was arrested for showing sympathy toward the priests when he placed his own hat upon the head of Father John Cornelius as the guards were leading the Irish priest to prison.

Bosgrave was a brave man. He cared nothing for the soldiery or what they might do to him, and as he placed his hat on the saintly brow of Father John Cornelius he declared in the broad accents of a Cornwall man: 'The honor I owe to your function may not suffer me to see you go bare-headed.' Bosgrave was immediately seized and his death followed not long afterward.

Another name that may be added to the list of Irishmen who died for the Faith in England during those dark days is that of John Roche. He was an Irish servant who in the company of a Margaret Ward, a lady of Cheshire, assisted in the escape of Father William Watson from Bridewell. He and Miss Ward were captured, tried and condemned. Roche died at Tyburn on August 30, 1588. He is now among the Blessed.

I would note that Irish have been going to England for centuries and even to now in search of better opportunities. After exclusionary laws were lifted in the 18th century, priests from Ireland were able to come over to minister to their fellow countrymen. It is not surprising that a number were martyred during the Tudor, Stuart and Cromwell years.

Yes, I have looked at the circumstances in which the various Irishmen martyred in England came to be there when looking at the individual cases. Some were there by choice, others, like James Dowdall of Drogheda, simply in the wrong place at the wrong time.