'This Most Constant Confessor' : Mr Ailworth, an Irish Martyr in London 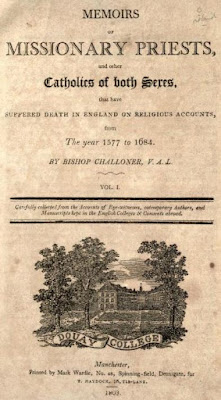 As regular readers of my blogs will know I am particularly interested in recovering the memories of the more obscure among our saints and martyrs. When I encountered an Irishman who died for the faith in England c.1580 and who is simply known as 'Mr Ailworth', I was immediately intrigued and wanted to learn more. Despite the fact that his Christian name has not been preserved, the details of Mr Ailworth's sufferings were recorded by two English priests of the Elizabethan period. They agree that our Irish martyr was imprisoned in a particularly insanitary London dungeon and there he died after just eight days. Bishop Richard Challoner (1691–1781), published both accounts in his pioneering work on the English Martyrs, Memoirs of Missionary Priests. The first comes from a collection known as the Concertatio Ecclesiae Catholicae in Anglia originally printed in 1583 and revised by English priest John Bridgewater in 1588. Bridgewater wrote of a number of Catholics, mostly priests, who had died in the early 1580s due to the rigours of their imprisonment and Challoner noted:


In the same place he also informs us of Mr. Ailworth, a secular gentleman, who, for his constancy in his faith, was not only cast into prison and there put into irons, but also thrust down by the jailer into a nasty dungeon, or, rather, a common sewer, where he perished by the stench, within eight days.

The second account is from another English priest, Father Henry Holland, who died in 1625. Among his papers was a letter written in Latin describing the sufferings of Catholics, again mostly priests, but which also included a more detailed description of the case of our layman Mr Ailworth:


'And since we are returned to London, I cannot pass over in silence Mr. Ailworth, a young Irish gentleman, of a singular zeal for religion, who had hired a house, not in any street, but among the gardens, commodious enough for preaching and mass, where the Catholics sometimes met in a pretty good number, to the divine service, much to his content and satisfaction, who set more value upon what belonged to the honour and worship of God, than upon any earthly toys. But the thing became known, and reached the ears of Fleetwood, the recorder of the city. This furious man, with his constables, came to the house, and finding Mr. Ailworth in his chamber, carried him away to prison, even to the very worst prison in London. And in the way, being displeased at some word that the gentleman spoke, gave this most constant confessor a most violent blow on his head; then ordered him to be put into a filthy dungeon, destitute of all things, strictly forbidding any one to be admitted to visit him, or give him any thing; so the young gentleman, in eight days time, was brought to his end, by the stench and filth of the place.'

The additional details provided by Father Holland suggest that our Mr Ailworth may have been a man of some means, since he was able to rent such a large house for the use of the Catholic underground community. Did he, as his surname suggests, belong to a prominent Old English family in Ireland? Father Denis Murphy in a footnote to the entry on Mr Ailworth in his book Our Martyrs noted that there was a family called Ailward (Aylward) of Faithlegg, County Waterford.  At the time of the Cromwellian conquest, when it was a matter of retaining Faithlegg Castle at the cost of compromising his Catholic faith, local historian Father Patrick Power describes the choice made by John Aylward:


While Cromwell was encamped before Waterford he sent a detachment, possibly the same which had stormed Passage, to take a castle at Faithlegg belonging to a Catholic gentleman named Aylward. Aylward was, it is stated, offered specially favourable terms if he but dissembled his religion, for Cromwell had known him previously and had been under some obligation to him. Aylward, however, rejected the terms as repugnant to conscience. His castle was thereupon battered down under the supervision of a Captain Bolton to whom Aylward's forfeited estate was given, and whose descendants held the property for two centuries afterwards.

According to this site the Aylwards, like other landed Catholic families, continued to struggle with maintaining both their position and their faith until eventually various family members chose to stop dissembling and conformed to Protestantism.

The Catholic Encyclopedia in its entry for English Confessors and Martyrs also suggests the possibility of a link between our martyr and the Waterford family:


Mr. Ailworth (Aylword), probably of Passage Castle, Waterford, who admitted Catholics to Mass at his house, was arrested, and died after eight days, 1580...

And what of the man who arrested and condemned Ailworth?  Father Holland's account emphasized the role played by the Recorder of London, William Fleetwood (c.1535-1594), telling us that he personally struck his prisoner 'a most violent blow on his head' when Ailworth said something that did not sit well with him. Fleetwood was a lawyer who had been elected Recorder of London in 1571. In 1580 he was made serjeant-at-law. Fleetwood's entry in The Dictionary of National Biography testifies to his reputation:


As recorder he was famous for rigorously and successfully enforcing the laws against vagrants, mass-priests, and papists.

However, this zeal once famously led him to be hoist with his own petard:


William Fleetwood, the recorder of London, was subjected to the supreme indignity of imprisonment in one of his own lock-ups for the presumption of leading an over-enthusiastic raid on the Portuguese embassy, designed to secure the arrest of the Englishmen illegally attending mass in the ambassador's chapel. From the Fleet Prison he wrote: 'This is a place wherein a man may quietlie be acquainted with God'.

Furnishing a similarly appropriate space for quiet communion with God was hardly in the mind of Recorder Fleetwood when he had Mr Ailworth placed in what amounted to an open sewer.

Mr Ailworth was recognized among the English martyrs who suffered during the reign of Queen Elizabeth I and in the nineteenth century his cause was submitted to Rome for consideration. However, The Catholic Encyclopedia states that he is one of the forty-four dilati, those whose cases have been delayed for further investigation. They are mostly people who died after a comparatively short period of imprisonment. Death ex aerumnis carceris, from the hardships of incarceration, is one of the categories in which martyrdom can occur. Naturally, it is a little more difficult to prove than the case of a person who was publicly hanged, drawn and quartered. Normally too it would involve a longer period of imprisonment; Father Holland tells us us that Mr Ailworth was a young man yet he was dead after barely one week. That may well be a testimony to just how extreme the conditions of his imprisonment were. Certainly it was possible to survive long periods in jail at this time; Blessed Margaret Bermingham endured the damp and cold of prison for three years before her death at the age of around seventy in 1584. Archbishop Richard Creagh, whose case is among the forty-two Irish Martyrs currently under renewed investigation, survived two decades of incarceration in Ireland and in the Tower of London, sometimes chained and in darkness, before being poisoned in 1586.

In any case I think it unlikely that the cause of Mr Ailworth will proceed. It is a pity because he was obviously a man not only of great faith, but of great courage as well. One can only imagine what he suffered under the humiliating and horrific conditions of his imprisonment. It is a pity too because I feel sure that further research could lead to some fresh insights. William Fleetwood apparently kept up a running commentary on his activities in letters to William Cecil, Lord Burghley, the Queen's senior advisor. Is there any reference to the Ailworth case among this correspondence? Or among other legal or prison documents? Could we locate a record of Fleetwood's examination of Mr Ailworth and see exactly what it was the Irishman said that so enraged him? Might we be able to discover precisely where and when he was incarcerated? Is it possible that further investigation of the genealogical records of the Aylwards could settle the question of whether our martyr was some scion of this family? Sadly, the reality is that the brave Mr Ailworth is just one of many overlooked and totally forgotten Irish Martyrs and thus all of these questions will probably remain unanswered.

Email ThisBlogThis!Share to TwitterShare to FacebookShare to Pinterest
Labels: Confessors, Irishmen Martyred in England, Lay martyrs, Martyrs in Reign of Elizabeth I