An Irish Dominican Martyr of 'The Pigrimage of Grace' 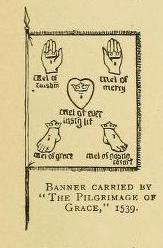 While reading Thomas Flynn O.P.'s 1993 study of the Irish Dominicans I was intrigued by a reference to an Irish Dominican priest, Ulick de Burgh, who was caught up in the 'Pilgrimage of Grace'. This is the title given to a series of rebellions in the north of England which began in 1536, provoked by the dissolution of the monasteries. These uprisings were put down with force by the state, as the nineteenth-century author cited in Father Flynn's book explains. Writing in 1879, S. Hubert Burke lays out the King's wishes for the rebels to be given no quarter:


"Our kingly pleasure is that, before you close up our Royal banner again, you shall cause such dreadful execution to be done on a number of the inhabitants of every town, village and hamlet that have offended, as shall make a spectacle to others who might wish to offend hereafter against our Royal command. Finally, as all those troubles have been caused by the monks and canons of those parts, you shall, without pity, cause all the said monks and all the said canons that in any wise have been faulty to be tied up without further delay or ceremony."

"Tied up" signified to be hanged from the nearest tree, "without benefit of clergy". The Duke of Norfolk obeyed the Royal command. In two days he hanged seventy-four persons in Westmoreland and Cumberland. A large proportion of them were priests, some forty, fifty, sixty, seventy, and one eighty-six years of age. To this number may be added twelve abbots who were hanged, drawn, and quartered . ....

It is in the aftermath of this horror that our Irish Dominican attempts to bring comfort by celebrating a Requiem Mass for those who had died 'without benefit of clergy', an act that costs him his own life:


An old tradition of Cumberland states that a number of poor women and their daughters collected the mutilated remains of the dead and gave them burial in a Christian form. On the following day an Irish Dominican named Ulick de Burgh celebrated Mass for the deceased Pilgrims; he was soon after arrested and hanged from a tree by Richard Crumwell as an "incendiary offering prayers for rebels who died without benefit of clergy".

The source for this episode is given by Burke as Woodville's Anecdotes of the Pilgrims of Grace and it records that the women suffered the same fate as the priest who had tried to console them.

I have been unable to find out any further information on Friar Ulick de Burgh. He shares his name with the Earls of Clanrickarde so I wonder if he is some scion of the great de Burgh family.  I do not know if any official record of his execution was made or whether the memory of this brave Dominican was preserved mainly in popular local tradition.