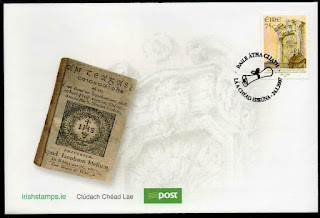 Following yesterday's posting on the Irish Franciscans in which their College of Saint Anthony at Louvain and its famous teachers and students were discussed, today we can look at some of the other Irish Colleges on the Continent. All of these establishments played a crucial role in educating Irishmen for the priesthood once the ability to access Catholic education at home was denied. The alumni then, at great personal risk, returned to Ireland to promote the Counter-Reformation and the author lists those who are numbered among the Irish martyrs. Those who continued to pursue the academic life also made a major contribution to the preservation of Irish tradition, the Annals of the Four Masters and the researches into the lives of the early Irish saints of Fathers John Colgan and Hugh Ward, for example, were all projects sponsored by the Franciscans of Louvain. The article below was syndicated from the London Catholic Times by the New Zealand press in 1925, and its byline 'How the Faith was Kept' is a very fitting one:

How the Faith Was Kept

The gratifying announcement that the Irish Franciscans have reacquired their old College of St. Anthony in Louvain recalls the successful efforts that were made abroad during the seventeenth and eighteenth centuries for the education and training of ecclesiastical students for Ireland. Numerous Irish colleges had to be established and maintained on the Continent; the most notable of them were the Irish College in Paris and the Irish Franciscan College at Louvain, the Irish College in Rome having but few students before the nineteenth century. The total number of Irish clerical students being educated on the Continent at the outbreak of the French Revolution was 478, and of these there were 348 in France. One result of the Revolution was the foundation and endowment of Maynooth College in 1795 by the British Government.

The Irish College in Paris still survives, educating at present about 100 Irish students for the secular priesthood. Its present Rector, the Rev. P. Boyle, CM., has written an interesting History of the College (London, 1901). Its history goes back to the late sixteenth century, when bands of Irish students began to settle in Paris. They were accommodated in various premises till the College des Lombards, in the Rue des Carmes, was handed over to them exclusively by Louis XIV in 1677. Among Bourdaloue's sermons is one he preached, probably in the year 1696, in aid of the Irish students' seminary. An earlier benefactor of theirs was St. Vincent de Paul. The Lombard College housed all the Irish students till 1770, when the Paris Irish College of the present day began to be built in the Rue du Cheval Vert, now the Rue des Irlandais, quite close to the Pantheon. In 1792, during the Reign of Terror, it fell under the ban of the revolutionaries. Its superior, the Abbé Kearney, who, with his friend, the Abbé Edgeworth, brother of the Irish novelist, Maria Edgeworth, had been present at the execution of Louis XVI, was in 1793 thrown into prison and narrowly escaped being guillotined. After the Revolution the College was re-opened; and from 1804 to 1814 the English and Scottish students in Paris as well as a few French students, lived (not always amicably) with the Irish students in the Irish College. After the disasters of 1814 and the restoration of the Bourbons the Irish Bishops sought to have the funds of the College annexed to Maynooth; but the French Government refused to allow this, and the Irish College was spared. It has also escaped, more or less, the confiscation threatened by recent French legislation regarding religious establishments. The late Cardinal Logue and the late parish priest of Youghal, Mgr. Canon Keller (called Kelleher in his earlier days), were students and afterwards professors at the Irish College. There were Irish Colleges also at Bordeaux, Toulouse, Nantes, Poitiers, Douai, Lille, Rouen, and Bourges. None of these survived the French Revolution. The biggest of them was the one at Nantes. To the Irish College at Douai, which was founded as early as 1577, an annual subsidy of 5000 florins was paid (not always promptly) by the King of Spain, till Douai was annexed to France in 1677.

In Belgium there were Irish Colleges at Antwerp and Tournai, and Louvain had three Irish Colleges—an Irish Dominican College, called the College of the Holy Cross, the Irish Franciscan College of St. Anthony, and an Irish College for the secular clergy, known as "Collegium Pastorale." All these were confiscated by the French revolutionaries. The Irish Colleges at Louvain (writes Father Boyle) during the sixteenth and seventeenth centuries gave to the Church in Ireland 32 bishops and about 300 priests, of whom 200 at least were graduates in arts of the University of Louvain. One of the rectors of the Irish Pastoral College, Thomas Stapleton, was also rector of the University. Five years after the suppression of the monastery of Donegal, their last house of studies at home, the Irish Franciscans established themselves at Louvain in 1606, with the approbation of Pope Paul V and an annual endowment of 1000 crowns from the King of Spain. Ten years later they acquired a new site at the corner of the Rue de Pantalu, and built their permanent College of St. Anthony, which they are again to occupy as a constituent college of Louvain University. For nearly 200 years the Irish Friars in Louvain did inspiring work for Faith and Fatherland. By the year 1630 their college had supplied to Ireland three archbishops, two bishops, and 63 missionaries. In 1619 it sent priests to the Hebrides, in Scotland. It provided professors for the Irish Franciscan College founded at Prague, in 1629, and for St. Isidore's, Rome, in 1625. In the list of Irish confessors and martyrs whose beatification is at present being promoted in Rome it counts eleven of its alumni —Brothers D. Cheevers and M. Hoare, Fathers J. Cathan, B. Conny, P. Fleming, W. Hickey, J. Kearney, F. O'Mahony, H. Stafford, W. Walsh, and N. Wogan. Early professors of the college whose names are still familiar to the learned were Father B. O'Hussey, whose Irish Catechism (Antwerp, 1608) was the first Catholic book ever printed in Irish; Father Hugh Ward, who compiled a Life of St. Romuald, the Irish patron saint of Mechlin; Father Patrick Fleming, author of a Life of St. Columba (Louvain, 1667), and other biographical work; and the celebrated hagiologist, Father John Colgan. A lay-brother of the college, Michael O'Clery, the chronicler of the Four Masters, was sent from Louvain to spend 20 years in Ireland collecting historical materials and eventually compiling his famous Annals. The college, too, became the last resting-place of many distinguished Irish exiles. In the chapel are buried Bernard O'Neill, son of the Earl of Tyrone Hugh O'Donnell, son of Prince Rory O'Donnell and grandson of the Earl of Kildare, and his namesake and cousin, the son of Caffar O'Donnell; also Lady Nuala O'Donnell, sister of the Earl of Tirconnell, and Lady Rose O'Doherty, his sister-in-law. This Rose O'Doherty was the wife of Caffar O'Donnell, who, with his brother, the Earl of Tirconnell, is buried in the Church of San Pietro in Montorio, Rome; after her husband's death in 1608 she left Rome for Flanders, and later married Owen Roe O'Neill, for whom a worthy dirge has been penned by Aubrey de Vere:

Lords and priests, ye talked and talked
In Kilkenny's Council Hall;
But this man whose game ye balked
Was the one man 'mong you all!

In Spain there were Irish Colleges at Salamanca, Seville, Madrid, Alcala de Henares, and Compostela. Of these the one at Salamanca alone survives. It bears the aristocratic title of "El Real Colegio de Nobles Irlandeses," and at present accommodates some 30 clerical students, who attend lectures at the diocesan seminary.

The Irish Colleges of Salamanca, Compostela, and Madrid enjoyed subsidies from the King of Spain. The College at Alcala, dating from 1590, had a big endowment from its founder, a Portugese nobleman, who was related to the McDonnels of Ulster. The fishermen of Seville obtained from Pope Paul V an indult permitting them to fish on six Sundays and holidays each year for the benefit of the Irish College of Seville. The Irish merchants at Seville granted the College a percentage on every cask of wine they sold; and Irish soldiers in the service of Spain gave it a portion of their pay. The founder of the Irish Colleges at Seville and Madrid was Father Theobald Stapleton, who afterwards died a martyr in Ireland.

In Lisbon also there was an Irish College founded in 1593 for the secular clergy. It came to an end during the civil wars in Portugal in the nineteenth century. The Irish Dominican friars and the Irish Dominican nuns still retain convents in Lisbon.