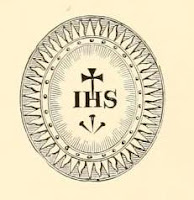 In a recent posting on the Irishmen who are numbered among the English Martyrs, the name of a Jesuit priest, John Cornelius, was mentioned. His name, in this Latinized version at least, does not suggest an Irish origin but sources claim that he was born in Cornwall to Irish parents. Other variations of his name are on record including Cornellis, Cornyllis, Mohun, Moone, O'Mahon and O'Magan. Interestingly, in the account of Father Cornelius published in Volume III of the Records of the English Province of the Society of Jesus, we are told that he translated a book on confession from English into the Irish language for the use of his mother.  The following account, taken from the Menology of the Society of Jesus, testifies to his deep piety and to the way his ministry touched the lives of others. One was Dorothy Arundell whose aristocratic family sponsored his studies and to whom he acted as a chaplain. She wrote a Life of Father Cornelius which although now lost has been reconstructed by modern scholar Elizabeth Patton. Indeed, as Arundell's Life was often incorporated without attribution into Jesuit sources, it is possible that she is the original provider of the information below. There is much more to explore in the life of this wonderful man which I hope to do in future posts, but today, on the anniversary of his martyrdom we can remember him in this account from the Menology of his Order:

The Venerable John Cornelius, who crowned a life of wonderful sanctity by heroic fortitude in his martyrdom on the 4th of July, 1594, was born of Irish parents at Bodmin, in Cornwall, and was their only son. His family, though well descended, had become greatly impoverished and owed much to the kind assistance of Sir John Arundell of Lanherne, who encouraged the boy's strong attachment to study, supported him at Oxford for several years, and afterwards sent him to Rheims, where he was kindly received by Dr. Allen. In 1580, he was transferred, along with five especially chosen companions, to the English College, Rome, at the age of twenty-three, and when there gave a rare example to all of every virtue, more particularly of modesty, recollection, and the custody of his senses. After receiving Holy Orders, he returned to England in September, 1583, and his first care on his arrival was to bring back to the Church his widowed mother, to whom his devotedness had been one of singular fidelity and constancy. His charity towards all was unbounded, and he could not hear of any being in trouble without hastening to their relief, whatever their nationality, creed, or condition might be. The intense earnestness of his words made them doubly impressive and persuasive, and gave great weight to his warnings and reproofs. He never consulted his own ease or interests, for his mind was fixed wholly on God and on the good of his neighbour. Taking little notice of those who were in daily pursuit of him, he continued to assemble the Catholics in different places, and they, corresponding to his unquenchable zeal, assembled in great numbers at the dead of night, in every kind of weather and at all risks, in order to be instructed and guided by him. Father Cornelius was full of love towards the souls in Purgatory, offering up in their behalf numerous alms, prayers, mortifications, and Masses; urging others also to do the same. His sanctity and fervour combined to give him great power over evil spirits, which often when leaving the possessed uttered horrible imprecations, declaring themselves unable to resist the charity of the Father, whose very approach could put them to flight. His piety towards God was remarkable, and he was frequently rapt in divine contemplation. While saying Mass his soul was inundated with heavenly delights, and during the Oblation he seemed to be in Heaven itself, shedding many tears either of compassion or of joy.

The first attempt made by a treacherous servant to seize Father Cornelius at Chideock Castle, in March, 1594, failed, but a second attempt on the 14th of April was successful. After his examination was finished, he was led out of the Castle attended by a crowd of five hundred persons, whom he courteously saluted and blessed, and who treated him with great reverence as a pious and virtuous man. The undeniable and irresistible sanctity that manifested itself in his whole person and action impressed even his captors and gaolers, for with unwonted sympathy they allowed him to take a tender leave of his aged mother. After a fortnight he was removed to London and lodged in the Marshalsea, where for two months he was inhumanly tortured. He was then conveyed back to Dorchester on the 28th of June, for his final condemnation and death. Before the martyr's consummation of his sacrifice, he prepared himself for it by the following act of devotion, which stands alone in the annals of the martyrs. On the evening before his death he begged the Sheriff to allow him to go, under guard, to visit the spot on which they were to execute him, that he might there make a meditation, by way of prelude to that great act. The Sheriff not only gave permission, but himself accompanied him, and there beheld him before the very gallows, after a momentary recollection, totally rapt in prayer, with his eyes and face raised to Heaven, earnestly offering himself to God, and imploring the especial aid so needful to him in the last action of his life. At length, about two o'clock in the afternoon of the 4th of July, the execution was carried out, against the conscience and amidst the regrets of all there present. Of the jury, four members acted with reluctance, and one had to be superseded. The Judge himself in passing sentence could restrain neither his tears nor his praises of the condemned man, and was in favour of a ransom; while efforts to save his life were made on all sides by petitions to the Court. For himself he declared that he was weary of this world, and aspired only after eternal life. "Grant me," he cried, "O sweet Jesus, that this alone may be the object of my words and of my actions."