Martyrs of the Diocese of Ferns 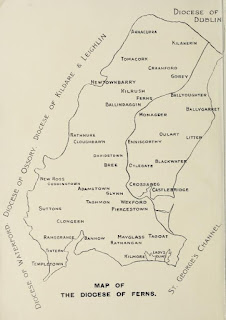 Following yesterday's tribute to the lay martyrs of Wexford, we stay in the area with a short introduction to the Martyrs of the Diocese of Ferns today. It has been taken from an appendix to the 1916 diocesan history by W.H. Grattan-Flood (1857-1928). Grattan Flood, although primarily a musicologist, was a prolific contributor to the religious press of his day. The term in odium fidei, 'from hatred of the faith', which he employs at various points in the text is one of the official categories in which martyrdom can take place. I found his account of Cistercian Father William Furlong particularly interesting, not just because I had missed reading about him in Canon O'Hanlon's Lives of the Irish Saints, but because he was regarded as a saint locally. He is not counted though among the martyrs. A group from Wexford, however, were included as representatives of laymen among the seventeen Irish Martyrs beatified in 1992 - baker Matthew Lambert and the sailors Robert Meyler, Edward Cheevers and Patrick Cavanagh. Here the author gives the name of a fourth sailor as 'John O'Leary' but I have discussed the problems with this identification in my post on the Wexford martyrs here. Grattan-Flood is correct, however, in naming the sailor sometimes called Patrick Canavan as Patrick Cavanagh. As Wexford was a centre of English influence from the time of the Normans it is no surprise to see so many Old English surnames among its martyrs:

Martyrs and Saints of the Diocese of Ferns.

Rev. Richard French, a secular priest of the diocese of Ferns, was arrested in January, 1578, for exercising the office of a priest, and for harbouring Father Robert Rochfort, S.J. He was marched to Dublin — compelled to walk manacled the whole way — and was thrown into Dublin Castle dungeon. After being tortured he was promised his liberty if he would merely acknowledge the supremacy of Elizabeth, but firmly refused. After three years he was sent back to Wexford jail, where he died a glorious confessor of the faith, on the 5th of May, 1581.

Matthew Lambert (Lamport), of Wexford, died in odium fidei, on July 1st, 1581. When brought to the block he boldly professed his faith and died joyfully like the martyrs of old.

Robert Meyler, Edward Cheevers, John O’Leary, and Patrick Cavanagh, were hanged at Wexford, on July 15th, 1581, because they had helped Father Rochfort, S.J., to escape. These four brave Wexford martyrs were constant to the last and never flinched. (Though the name of the last-mentioned is given in the Apostolic Process as “ Canavasius" or Canavan, I feel fairly certain that it is intended for Cavanagh). Bishop Rothe gives the name as “Canauasius.”

Patrick Hay, a native of Wexford, on account of his humanity in succouring bishops and priests, and also in helping them to voyage to Spain and France, was brought a prisoner to Dublin Castle, where he was treated so rigidly that he died a confessor of the faith, in the autumn of the year 1581. He was not only a ship owner but was also a skilled sailor. Bruodin records his death under date of November 4th, 1600.

Rev. John Lune (Lyng), a zealous secular priest of Wexford, was hanged in odium fidei, at Dublin, on November 12th, 1610.

The name of another Ferns priest appears in O'Hanlon’s Lives of the Irish Saints, namely. Rev. William Furlong, O.Cist., (son of Alderman Patrick Furlong, of Wexford), who studied at Oxford, and then became a Cistercian monk in Spain. He returned to Ireland in 1598, and laboured zealously till his death, having received 4,000 heretics into the fold of the true Church. King James, hearing of the many miracles wrought by this holy monk, had him brought to Court and permitted him to go back to Wexford and exercise his ministry. In 1612 Bishop Ram reported him to the Irish Government. Not alone was he famed as a miracle worker but he is said to have had the gift of prophecy. He died on April 8th, 1616, and was regarded as a saint. O’Hanlon has a short notice of Father Furlong — whom he incorrectly styles “White” on the assumption that his name in religion was “Candidas” — under date of May 2nd. His remains were interred in St. Patrick’s Church, Wexford.