Why Ireland Rejected the Reformation - a View from 1613 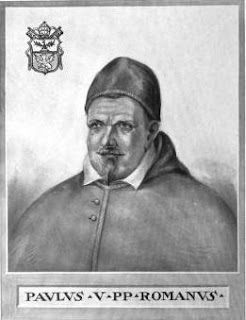 In a report made to the Holy See on April 6, 1613, the Brussels Internuncio, Monsignor (later Cardinal) Guido Bentivoglio (1579-1644), provided his view of the state of Catholicism in Ireland. Monsignor John Hagan (1873-1930), rector of the Pontifical Irish College, Rome reproduced the original report in Italian, but helpfully included a summary of its main points in English. Bentivoglio reported that the Catholic population were 'nearly all openly professing their religion', that 'the English penal laws were not enforced' even if 'externally Protestantism is in the ascendancy, all the Archbishoprics and bishoprics being in the hands of the heretics.' He then goes on to give the reasons why Ireland has rejected the Reformation:


The people have preserved the faith because naturally inclined to it; always attached to the Holy See; always hating the English;  always opposed to novelty and tenacious of old customs.  Heresy introduced by violence and against their wish...

I think it would be fair to say that these points are still the ones discussed by historians of the Reformation today. The concept of the Irish having a 'natural inclination' to Catholicism is an interesting one, especially since today it is commonplace to hear that everything "is in our DNA". An historian, however, can make the case that an overwhelmingly rural society with few large towns or cities is indeed more naturally predisposed to conservatism, without having to reference human genetic code. In Britain the 'new learning' of the Reformation was avidly discussed in intellectual circles at universities but Ireland did not have a university of its own until 1592 when Trinity College was founded. In regards to the attachment to the Holy See, a modern historian of the Dominican order in Ireland has made this point:


Both Anglo-Irish and Gaelic Irish reverenced the papacy and perceived it positively as a force in halting the English crown's ecclesiastical encroachments. So often in fact, did they make direct appeal to Rome that they were, on occasion, bitterly castigated as Rome-runners.

The colonial relationship between England and Ireland was also a factor as was the reality that the Reformation was linked to Anglicization and thus viewed as an alien imposition from without. As far as opposition to novelty and the holding on to old customs is concerned, it is perhaps worth reflecting that it wasn't just Protestant ministers who despaired of ever weaning the natives from their attachment to medieval religious practices and traditional customs. For Catholic missionaries returning from the Continent full of reforming Tridentine zeal made the same complaint. And finally, there is no doubt that the fact that the Reformation was accompanied by military conquest and destruction was indeed yet another factor in its rejection. There is no evidence of a demand for Reformation among the Irish themselves, so Cardinal Bentivoglio's observation that it was introduced against their wish also has merit. Overall, his analysis from four centuries ago still has a relevance to the modern debate on the reasons why Ireland rejected the Reformation.

Email ThisBlogThis!Share to TwitterShare to FacebookShare to Pinterest
Labels: Opposition to the Reformation