The Miraculous Image and Shrine of the Madonna of Youghal

Yesterday we had a late nineteenth-century account of the Dominican Abbey at Youghal and the famous shrine of Our Lady of Graces it once housed. Today we have a mid-century account from one of the early volumes of The Ulster Journal of Archaeology by a native of Youghal, Rev. Samuel Hayman (1818-86). Hayman was a Church of Ireland clergyman and member of a prominent family which had come to Ireland in the early seventeenth century. Like many of his contemporaries he was a keen antiquarian and contributor to various journals. He claims that this article on the 'Madonna of Youghal' brings illustrations of the shrine into the public domain for the first time. Yet being a Protestant churchman he is also keen to try and rationalize the miraculous story of its discovery: 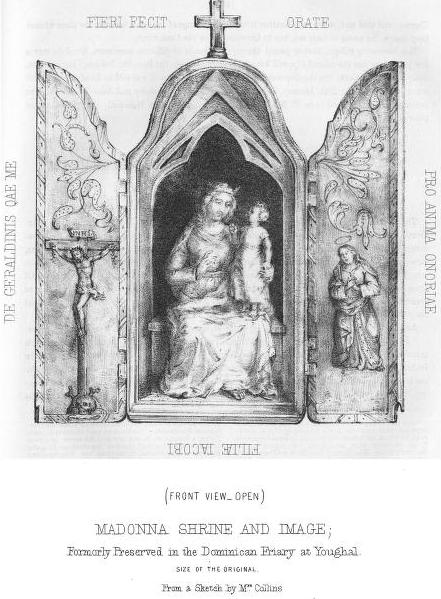 No 2.-THE MIRACULOUS IMAGE AND SHRINE OF THE MADONNA OF YOUGHAL

The Dominican Friary of Youghal was founded in the year 1268, by Thomas FitzMaurice FitzGerald, generally called nAppagh, Simiacus, or the Ape. It was originally placed under the Invocation of the Holy Cross (S. Crux,) perhaps in allusion to the Family Arms of the Founder; but, subsequently, this was changed, and the House was dedicated to St. Mary of Thanks, (S. Maria Gratiarum,) on account of a much-venerated Image and Shrine of the Madonna it had acquired. Of these we furnish drawings, carefully made for this Journal. They will be found valuable, not only as preserving to us an interesting specimen of Medieval Art, but as helping to illustrate the records of one of the old Monasteries of Ireland.

And first as to the "invention" or finding of the Relique, the story of which is sufficiently curious: "In the Dominican Convent," [i.e. at Youghal,] writes M. de la Boullaye le Gouz, the French traveller in 1644, "there was an Image of the Virgin, formerly held in the greatest veneration in Ireland, which arrived there in a miraculous manner. The tide brought a piece of wood on to the sands opposite the town, which several fishermen tried to carry off, the wood being rare in this country, but they could not move it; they harnessed ten horses to it without effect, and the refiux of the tide brought it near the Dominican convent. Two monks raised it on their Shoulders and put it in the court-yard of the convent; and the prior had in the night a vision that the image of our Lady was in this piece of wood; which was found there. So say the Catholics, who have still a great devotion towards it; but the Dominicans having been persecuted by the English settlers carried it elsewhere."

This legendary story, with but little variations, is still currently repeated at Youghal. What M. de la Boullaye le Gouz heard told in 1644, may yet he listened to at the fireside of the humbler Roman Catholic inhabitants. When divested of some of its marvel, the tale may have had its foundation in fact, as thus: -

A large piece of the wreck of a vessel having come ashore, several fishermen failed with ten horses in securing, it. The sea having broken it up, a portion was carried near the Dominican Friary, and was brought thither by two of the brethren. In this piece was found, or there was picked up at the same time, a little ivory image of the Madonna.

The image is, as we have stated, of ivory, now much worn by attrition and discoloured by age. It is, apparently, of Italian workmanship of the fifteenth century. The Virgin Mother is represented in a sitting posture, her gaze wistfully fixed on the infant Jesus, who is standing erect on her knee, and is supported by her left hand. Her head is a little inclined towards him. Worn as are the features, the expression of her face, in connection with her half-clasping right hand, is that of exquisite maternal love. She is crowned; and from her diadem descend lappets upon her shoulders. Her garments are loose, but are cinctured at the waist. The infant's dress is a simple frock or tunic. His face is directed towards his mother's. His head is bare; nor is there any appearance of a nimbus around it. 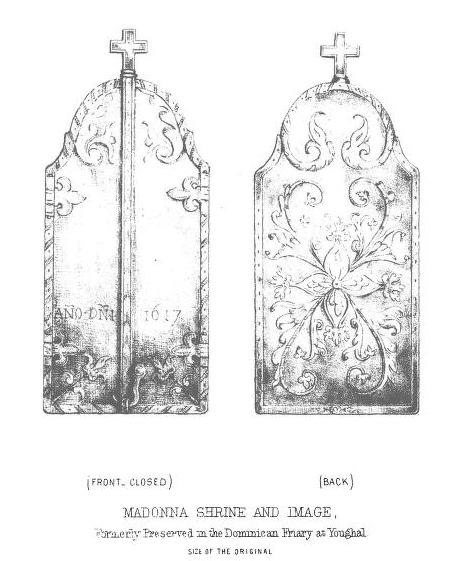 The Shrine, in which the image is kept, is of silver and once was gilt. Our engravings are of the exact size of the original, and accurately set forth all its details. It is a little box or case, about four inches in height, by two in width. The top assumes a conical shape, and is surmounted by a cross. The front opens with two folding-doors on hinges so as to admit a full sight, through a piece of glass, of the enclosed image seated on a bench. The leaves of the doors, when thus opened, display on the left hand the Crucified Redeemer, with INRI over his head, and emblems of mortality at the base of his cross, and on the right hand a saintly figure praying, invested with a "glory." The portions of the doors above these figures, and the whole back and sides of the shrine, are ornamented with incised floriated chasings, done in a free bold style of workmanship. The shrine is inscribed with the following legend, in Roman letters:_

The Lady Honor Fitzgerald, who presented this shrine to the Dominicans of Youghal, was the only child of Sir James of Desmond, who having been deeply concerned in the Geraldine revolt in Munster was slain in 1579 by the sons of Sir William Burke, and was gibbetted in the market-place of Kilmallock. She "first married" (writes Lodge,) "John Fitzgerald, Seneschal of Imokilly; and, secondly, Sir Edmond, son and heir to Sir John Fitzgerald of Cloyne and Ballymaloe, by whom she had one son, Maurice of Castle-Liffing, and three daughters, viz. Ellen, married to Dermoid, Lord Inchiquin; Mary, to Owen O'Sullivan More; and Honora, to Patrick, Lord of Kerry." The date of the shrine is engraven on it; but we consider the image to be nearly two centuries older.

The possession of this relique brought great fame to the House of Dominicans at Youghal. The image became "devotissima," most venerated, as the author of Hibernia Dominicana informs us. From every part of Ireland, the devout thronged to it for purposes of prayer; and miracles were ascribed to its agency. The monastery itself underwent a change of dedication; and was now denominated "Conventus Deiparae Gratiarum Yeoghelensis," as appears from the Register of the Order, dated 19 Feb, 1639-40. Nor was there fame only, but rich offerings were poured in. To such amount grew these treasures, that the Provincial of the Dominicans considered them too much for a single establishment, and devoted them to the general support of the Fraternity in Ireland. An appeal seems to have been made against his decision; for we find the following Order passed at a Most General Chapter, held at Rome in the year 1644, under the 56th Master of the Dominicans, Thomas Turk, of Cremona:

"We apply all the Alms which are offered at the most venerated Image of the Blessed Virgin Mary of Youghal, to the use of the monastery itself, nor can the Provincial in future dispose of them in any other way,"

In the year 1698 the Monastic Orders were commanded to depart out of Ireland, never to return, on pain of death. The miraculous image of the Youghal Domincans was confided during their banishment to the keeping of Sir John Hore, a Roman Catholic gentleman, who resided at Shandon Castle, in the county Waterford. We find it in 1756, (when Bishop Burke was compiling his history) once more at Youghal, and in the possession of Thomas O'Kelly, the then prior of the Dominican community there. It was subsequently transferred to Cork, where we understand it is still preserved in the Dominican Friary, dedicated to St. Mary on Pope's Quay in that city.

The writer's obligations are due to his gifted friend, Thomas Crofton Croker, F.S.A., for much kind assistance in procuring the illustrations of the Shrine. He would offer his respectful thanks to Mrs. Collins, daughter of the Roscoe of Cork, the late James Roche. To this lady's pencil the open front view of the shrine is to be attributed. He begs to acknowledge, also, the kindness of the Rev. Mr. Russell, Superior, O.S.D., Dublin, and of the Rev. Mr. Carberry, of St. Mary's Priory, Cork, through whose permission the other drawings have been made. The whole are now, for the first time, given to the public.

Email ThisBlogThis!Share to TwitterShare to FacebookShare to Pinterest
Labels: Iconoclasm, Relics, Suppression of the Monasteries