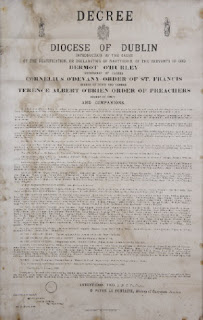 Below is the text of the 1915 Papal Decree on the Beatification or Declaration of Martyrdom of the Irish Martyrs. It was the fruits of the labours of the nineteenth-century Irish churchmen Father Denis Murphy S.J. and Patrick Francis, Cardinal Moran but alas, neither lived to see its publication. Archbishop William Walsh of Dublin, however, who had taken charge of the diocesan inquiries and prepared the materials submitted to Rome was there to witness this day. The decree provides a list of the martyrs laid out according to ecclesiastical rank and membership of religious orders. Laymen and 'noblemen' are grouped together, with females listed at the end.

The following is the text in English (writes the Rome correspondent of the Catholic Times, under date March 18) of the Papal Decree on the Beatification or Declaration of Martyrdom of the servants of God, Dermot O’Hurley, Archbishop of Cashel; Cornelius O Devany, Order of St. Francis, Bishop of Down and Conor; Terence Albert O’Brien, Order of Preachers, Bishop of Emly; and their Companions:

In Ireland, the nursery of heroes, of the innumerable champions of Christ who fell in the unbridled and furious persecution waged against Catholics in the sixteenth and seventeenth centuries, and whose names are written in the Book of Life, the greater number are unknown, but many are known by name and fame and still live in the memory of men. Among these are numbered fourteen Bishops of the Church, many priests of the secular clergy, and others belonging to the religious families or Orders—namely, the Premonstratensians, Cistercians, Friar Preachers, Franciscans, Augustinians, Carmelites, the Order of the Blessed Trinity, and the Society of Jesus, as well as laymen and men of noble rank, to whom are to be added six devout women. Since the proofs of their martyrdom forthcoming seemed to be of sufficient weight, an investigatory process on the reputation for martyrdom and the signs and miracles of the aforesaid servants of God was undertaken and brought to a successful issue in the ecclesiastical court of Dublin. This investigatory process was forwarded to the Sacred Congregation of Rites in Rome and was followed by many petitions from archbishops and bishops, especially in Ireland, and from others eminent in Church and State. When all was in readiness, on the presentation of Monsignor O’Riordan, Protonotary Apostolic, Rector of the Irish College, and Postulator of the Cause, who put forward the wishes of the whole Catholic nation of Ireland, the Most Eminent Lord Cardinal Vincenzo Yannutelli, Bishop of Palestrina, and Ponente or Relator of the Cause, at an ordinary meeting of the Sacred Congregation of Rites, held at the Vatican on the date given below, proposed a discussion of the Sacred Congregation of Rites on the following doubt: 'Is a commission for the introduction of the Cause to be instituted in the case and for the purpose of which there is question?' And the Most Eminent and Reverend Fathers of the Sacred Congregation of Rites, on the motion of his Eminence the Cardinal Ponente, and after obtaining the opinion of Mgr. Verde, Promoter of the Faith, having maturely examined, discussed, and weighed all circumstances, decided to reply: The commission is to be instituted in the Cause of 257 Servants of God, if it is pleasing to his Holiness - namely:

Thomas Aquinas of Jesus, Angelus of St. Joseph, and Peter of the Mother of God.

Order of the Blessed Trinity.

As to the other twenty-three Servants of God, 'Let the cause be postponed and the evidence be further strengthened.'

On a report of this being referred to our Most Holy Lord Pope Benedict XV. through the undermentioned Secretary of the Sacred Congregation of Rites, his Holiness confirmed the Rescript of the Sacred Congregation, and deigned to approve with his own hand the Commission for the Introduction of the Cause of the 257 aforesaid Servants of God on the twelfth day of the same month and year.

ANTONY CARD. VICO,
Pro-Prefect of the S. Congregation of Rites.