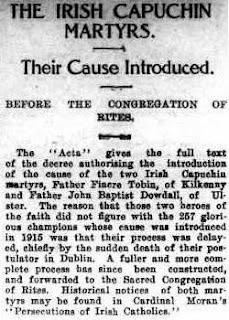 A brief introduction to two Irish Capuchin martyrs today in this article from 1919 which appeared in the Australian press. It seems that due to the sudden death of postulator Denis Murphy, S.J. in 1896, Father Fiacre Tobin and Father John Baptist Dowdall were overlooked when the names of the 257 Irish martyrs were submitted to Rome in 1915. I have reprinted the 1915 official list here and look forward to writing more about each of these Capuchin martyrs omitted from it. The Irish Archive Resource has a good deal of information about their case here.

BEFORE THE CONGREGATION OF RITES

The 'Acta' gives the full text of the decree authorising the introduction of the cause of the two Irish Capuchin martyrs, Father Fiacre Tobin, of Kilkenny and Father John Baptist Dowdall, of Ulster. The reason that those two heroes of the faith did not figure with the 257 glorious champions whose cause was introduced in 1915 was that their process was delayed, chiefly by the sudden death of their postulator in Dublin. A fuller and more complete process has since been constructed, and forwarded to the Sacred Congregation of Rites. Historical notices of both martyrs may be found in Cardinal Moran's 'Persecutions of Irish Catholics.'

Father Fiacre Tobin was born in Kilkenny, and, at a young age, entered the Capuchin Order. He was sent to Charleville, in France, for his philosophical and theological studies. Being destined for the Irish mission, he received orders from his Superior to return to his native land in 1646. Full of the spirit of God, and well instructed in the sacred sciences, he broke the Bread of Life to his fellow-countrymen, until Cromwell came to Christianise them. He was in Kilkenny in 1650, when the city fell into the hands of the Protector. He remained to attend to the spiritual wants of the Catholics, showing heroic devotion in administering the Sacraments to the sick and dying while a plague raged amongst the population. After five months he was captured by the heretics, and cast into prison. Whilst he awaited the hour when he should be dragged forth to death, he found favour with his gaoler, and was allowed to say Mass and minister to the Catholics. Soon afterwards, at the instance of the principal Catholic citizens, he was allowed to move about freely within the limits of the city. The law of banishment against the clergy, passed in 1653, obliged him to leave the country, and fly to France. Almost immediately, however, with the consent of the Commissary-General of his Order, he returned to the island, and spent himself for two years for the glory of God and the salvation of souls. At the beginning of the year 1656 a priest-hunter deceived him into revealing himself, and he was carried in bonds to Dublin. At his trial he boldly declared that he was a Capuchin priest, who had returned to Ireland prepared to seal the testimony of his Catholic faith with' his blood, expecting no mercy from hands already dyed with martyrs' blood. It was his one desire, he said, to see them put their iniquitous law into force, and give him the privilege of dying for his faith. Lest his execution should only serve to confirm Catholics in their faith, the sentence of death passed upon him was commuted into transportation to the Barbardoes. After suffering for a month bound in a horrible prison under tho cruellest of guards, the servant of God was placed on board a vessel to be taken to his place of exile. Although suffering from fever, he was left loaded with chains and half-naked to lie on hard boards, with a piece of wood for a pillow, receiving as his only nourishment a few half-cooked peas, and bad water. The inclemency of the winter weather added to his sufferings. His ship was obliged by storms to put into port in Waterford, and there he died of the hardships he had undergone at the hands of the British heretics.

The other hero, John Baptist Dowdall, belonged to a noble Ulster family, but despised the honours and riches of the world to follow Christ more nearly as a humble Capuchin. Two years before his martyrdom a letter to Propaganda speaks of him as follows: The venerable Father John Dowdall has dedicated himself with heroic zeal and entire devotion to the labours of the mission during the past 40 years. His work has been crowned with marked success. He has converted many heretics to tho faith,, administered the Sacraments to several of the most eminent persons in the kingdom, and has attached all to him by the gravity of his manners. During the fierce persecution that raged against Catholics — those especially who won Protestants to the faith — during the reign of Queen Anne (1702-1714) an Act of Preventing the Further Spread of Popery made such persons liable to capital punishment. A bold missionary like Father Dowdall could not long escape. He was arrested several times, and left to pine away from hunger in a miserable prison. At last, having succeeded in converting a noblewoman to the faith, he was accused by her relatives, taken by the authorities, and transferred to a prison in London. There, worn out by hunger and cold, amidst the sufferings of his hard prison and the blasphemous insults of his gaolers, he passed to a better life, adorned with a martyr's crown, in the year 1710.