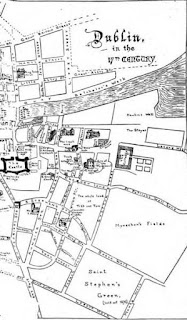 Father Thomas Fitzgerald who died on July 12, 1617 in prison in Dublin is one of the Irish Franciscan priests who had trained abroad in order to return to Ireland as an apostle of the Counter-Reformation.  The entry on a list of students of the Irish College at Salamanca records:

He may also be the Friar Thomas fitz Edmond Gerrald, preacher of the order of St Frances listed in a report on Catholic personnel in Ireland compiled around 1613, possibly for Lord Deputy Chichester. [2]

An account of his arrest in Youghal by a Captain Goar has been preserved in the diary of Richard Boyle, Earl of Cork for April, 1613. Boyle says he kept the prisoner in his own house for fifteen days before he was transferred to the custody of the Lord Lieutenant in Dublin:


21 Capn goar apprehended Thomas Fitzgerald the ffrier in yoghale, I being then at Dongarvan; and when I cam home I brought him from the goale, & kept him in my own house xv daies, till the L Deputy sent for him. [3]

Father Fitzgerald was also one of the martyrs recorded by the seventeenth-century writers and the following account, from Father Denis Murphy's 1896 collection Our Martyrs, draws on that found in the 1669 work Propugnaculum Catholicae Veritatis by Irish Franciscan Anthony Bruodin. In true hagiographical style Brudodin tells us that Father Fitzgerald was so virtuous that from childhood he was already considered a saint. He spent the years of his ministry preaching in woods and caves and administering the sacraments in private houses before being arrested and imprisoned. Finally, Father Murphy records in a footnote that the reference to 'the Bishop' at the end of Bruodin's piece is to another martyr, Bishop Conor O'Devany, who was buried in Saint James' and the account of whose martyrdom immediately precedes that of Fitzgerald:

He was descended from the very ancient family of the Earls of Desmond. From his very childhood he was so virtuous that he was considered a saint. When he was enrolled in the Seraphic Order, not only did he strengthen himself by vows in the virtues which he practised in the secular state, but he added others to them. He completed his studies in Spain, and in 1609 he taught theology in the College of St. Anthony of Padua at Louvain.  Filled with zeal for the salvation of souls, he returned to Ireland at a time when the pestilential heresy of the English was rampant everywhere. He was Commissary and Visitor of the Irish province. For many months he was unwearied in his task of feeding the Catholic people of Munster and Leinster with the word of God, at one time preaching to them in the woods and caves, at another administering the sacraments in private houses, at all times setting before them an example of every virtue, especially of charity, modesty, the token of his inward purity, religious humility, and burning zeal. When he had passed four years in this secret and hidden way, consoling the Catholics, he was seized by the heretics, taken to Dublin, and cast into an underground prison. Worn out by hardships he died there on the 12th of July, 1617. The citizens having asked for his body, celebrated his obsequies for three or four days with much devotion, to the great surprise and indignation of the heretics, who strove to prevent them. At length his remains were laid in the same cemetery as those of the Bishop. [4]

Father Fitzgerald is number 113 on the Official List of Irish Martyrs whose cause were submitted to Rome for consideration.