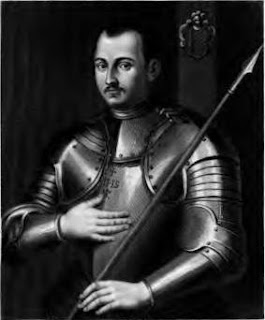 Below is a short article published in 1948 in The Heights, a student newspaper of Boston College, which introduces us to the Irish Jesuit martyrs. They include an Irishman who did not meet his death in Ireland, Father John Meagh, martyred in what is now the Czech Republic in 1639. A Jesuit, Brother Dominic Collins, is among the seventeen Irish martyrs beatified in 1992. I can only regret that this piece is not illustrated with the engravings of the executions which were on display at the time it was written:

Currently on display at the Library are reproductions of engravings depicting the executions of six Irish Jesuit martyrs. All the reproductions have been made by Melchor Kusel, one of the earliest of fine wood engravers. Most of the martyrs had returned to their native land, after being educated on the Continent, to keep the Faith strong in their fellow countrymen. All but one of these Jesuits suffered martyrdom in Ireland. The first of these, Fr. John Meagh, S.J., died at Gutenburg on May 31, 1639. He was beheaded by a masked executioner while kneeling in prayer. Brother Dominic Collins was a military man of wide repute, having served in the army of both France and Spain. After becoming a Brother, he was captured by the English while he was assisting the Irish army fighting under Hugh O'Neill. Tortured for four days, he steadfastly refused to give up his Faith. Before his execution, he pleaded with the onlookers to remain firm in their religion. The third martyr, Rev. Edmund Donnelly, S.J., was captured by English soldiers at Limerick and mercilessly dragged to Cork. On his refusal to apostasize and to accept Elizabeth as the head of his church, he was hanged, drawn, and quartered. Fr. William Boynton, S.J., a priest of Cashel, refused to flee before the onslaught of Lord Inchquin and his soldiers, who were pillaging the countryside. He and his flock took refuge in their church, situated on the famed Rock of Cashel. Two days later, the English, after overcoming the resistance, burst into the church and imprisoned the little congregation. On September 15, 1647, Fr. Boynton and all his parishioners were put to death. Rev. John Bath, S.J., and his brother, a secular priest, were cruelly executed by Cromwell's soldiers who fired bullets at them as the priests stood tied to a stake. These same soldiers destroyed the furniture, the library, and the sacred vessels of the beautiful Jesuit residence at Drogheda, the place of the execution. The last reproduction portrays the death of Rev. Robert Netterville, at the hands of the Puritans, in this same town of Drogheda. Aged and sick, after a lifetime of service to God, he was taken from his sickbed, dragged along the highway, and beaten with clubs until he seemed dead. He still lived, however, for four agonizing days. At length God called him on August 16, 1649.